Honeymoon is over as Ruto camp strike Uhuru kin 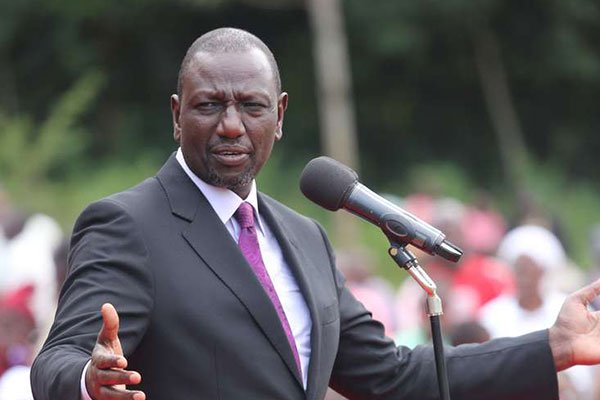 Honeymoon is over as Ruto camp strike Uhuru kin

Deputy President William Ruto’s allies, fighting to regain control of the ruling Jubilee Party, took the war to President Uhuru Kenyatta’s doorstep Saturday with a barrage of damaging revelations, including an exposè on how a company associated with the president’s relatives was awarded a multimillion-shilling tender to supply key campaign materials in the run up to the 2017 elections.

Details of the tenders to the Kenyatta kin, which insider critics of the party are calling “conflict of interest”, now form part of a concerted fightback by Dr Ruto’s camp in the wake of an announcement Saturday by Jubilee Party Secretary-General Raphael Tuju that the party had formally kicked out five members of the National Management Committee and appointed replacements without the deputy president’s approval.

The fightback also points to a messy period in the coming days as politicians on either side of the divide mudsling each other and reveal long-held secrets.

As one observer put it, the divorce is about to get messy, and a lot of beans will be spilt in the process.

She is also the chief executive officer of Kenyatta International Convention Centre. President Kenyatta, meanwhile, is the Jubilee Party leader.

On LinkedIn, an online website where members list their academic and work-related achievements, Ms Gecaga states she is the owner of Bora Ubora.

E-mails seen by the Sunday Nation show how Ms Gecaga, her brother Jomo and Ms Selina Renee Pratt pressured party officials to pay the company, in some instances even without full documents. Ms Pratt is also President Kenyatta’s niece.

In one e-mail, an official of Jubilee Party named Joseph Mulili writes to Ms Pratt asking for proof of deliveries after having already been asked to act on invoices.

“Please send me all delivery notes and their corresponding invoices. I have not received any delivery from you as yet. As I explained, the delivery notes have to be duly signed and received,” wrote Mr Mulili on January 27, 2017 at 8.06pm.

In another instant, Mr Mulili declined to pay an invoice because delivery notes for an amount of Sh20,000 had not been forwarded, but party treasurer Wambui Gichuru advised him to carry on.

“Process this payment on Monday and copy me on the process,” wrote Ms Gichuru February 24, 2017 at 9.11pm. The email was copied to Ms Pratt, Mr Mulili, Ms Gecaga and Mr Gecaga.

As details of the tenders emerged, Dr Ruto’s supporters also pointed out that Jubilee was among several parties that had not filed their annual returns as required by law.

They accused Mr Tuju of mismanaging the procurement and financial affairs of the party, but the secretary-general told the Sunday Nation that the party adheres to the Public Procurement and Disposal Act.

“We receive funds from the government and therefore have to follow the law,” said Mr Tuju. “We even advertised for supplies.”

Mr Tuju added that he may not have details of companies that work for Jubilee, but was quick to point out that unlike ministries, the party is allowed to receive donations.

“Someone may decide to bring us Sh1 million but in form of T-shirts, which they procure without involving us,” he said.

Mr Caleb Kositany, the Jubilee Party deputy secretary-general, disagreed with Mr Tuju, saying that, while the Political Parties Act demands the publishing of annual reports, there was evidence his own party had disobeyed the law.

“We receive public funding from the Political Parties Fund, and as such we ought to file our annual audited returns,” he said.

National Assembly Budget Appropriations committee chairman Kimani Ichung’wa, an ally of the deputy president, said Jubilee had not tabled its audited financial reports since it was formed three years ago.

“Parliamentary political parties in this country ceased to be personal property owned and managed through the whims of individuals,” he said.

“Mr Tuju seems to have missed that simple fact. They are public institutions to enhance the growth of our democracy and are funded by taxpayers. In this year alone, we have appropriated close to Sh1 billion — Sh800 million, to be precise — to fund the parliamentary political parties.

They have not complied with the law even in regard to the tabling of audited accounts to show how party resources are utilised, and there is evidence that these resources have been abused to benefit a few individuals.”

The no-holds-barred reaction to the Tuju shocker from the Ruto camp was the biggest signal yet that the deputy president is rolling up his sleeves and strapping his boots, ready for battle.

Away from public limelight, and stung by the realisation that those fighting him in the party are no pushovers, the DP on Friday summoned a clique of his politburo for a brainstorming session to chart the way forward.

They agreed on a number of action plans, including filing a suit in court to block the changes, painting the other faction as corrupt and power-hungry, moving in to secure Jubilee Party at all costs, and increasing defiance by members of the Tanga Tanga group, who plan to take on President Kenyatta more viciously and, as in the case of the 2017 tender leaks, directly.

The attacks on the president are not only meant to guilt-trip him by portraying him as a man who cannot keep his word on the promise to support Dr Ruto’s presidential bid, but also dig into the implication such “betrayal” portends to his community in future alliance-making, or what some politicians have christened “selling fear”.

To counter Dr Ruto’s open isolation from the running of government, bloggers who operate from his office have been hard on the government, poking holes in the report from the Ministry of Health on coronavirus expenditure and drawing parallels between Uhuru’s State House and the DP’s Karen office — that whereas one gave a provision for a bar, the other set up an altar for worship.

There is also heavy investment in propaganda warfare largely meant to make the government, rightly or wrongly, look corrupt and out of touch with the plight of the people.

Two days ago, a list of Kieleweke MPs (Jubilee leaders who oppose the DP’s presidential bid) was circulated on social media with claims that they had been invited to a breakfast meeting at State House.

The aim, we gathered, was meant to forestall such a meeting, which is said to be in the works.

As part of their fightback, Ruto allies are now painting the changes in Jubilee as a plot to pave the way for a Raila Odinga presidency.

Mathira MP Rigathi Gachagua said they were disgusted that Mr Tuju was taking advantage of the coronavirus crisis to carry out a coup that will benefit Mr Odinga, “but the rank and file are with Ruto”.

“A party is like a classroom. It’s not about walls and desks, but parents and teachers. Tuju may have the physical parties but members are with us,” said Mr Gachagua, promising:

“Make no mistake; our people will not accept political projects, and we are in Jubilee to stay. We are not leaving it to anyone.”

Mr Tuju responded by telling those disgruntled by the changes to seek legal redress.

Sources have told the Sunday Nation that after taking control of the party, the president will now push for a change of guard in the parliamentary leadership that is populated by lawmakers who owe their allegiance to the DP.

The two majority leaders Aden Duale and Kipchumba Murkomen are possible casualties of the scheme, not just because they are Ruto’s allies, but also because they have been among the loudest group of politicians who have raised their opposition to the changes proposed by Mr Tuju.

Both Mr Duale and Mr Murkomen were among those who wrote letters of protest to the Registrar of Political Parties Anne Nderitu with a request that the decision be revoked.

However, sources on Saturday intimated that the Ruto team is aware of the scheme and is ready to take on the rivals, with one of the leaders promising a “battle royale” in the struggle to regain the control of the party.

Nandi Senator Samson Cherargei said they will kick out Mr Tuju. “Tuju is on his way out. In the next 30-60 days, he will be out of that office. You can’t insult the owner of the cow yet you are just the caretaker of the cows. We are going to use both legal and extralegal means to ensure he gets out of that office,” he said.

Honeymoon is over as Ruto camp strike Uhuru kin Reviewed by samrack on May 3, 2020 .