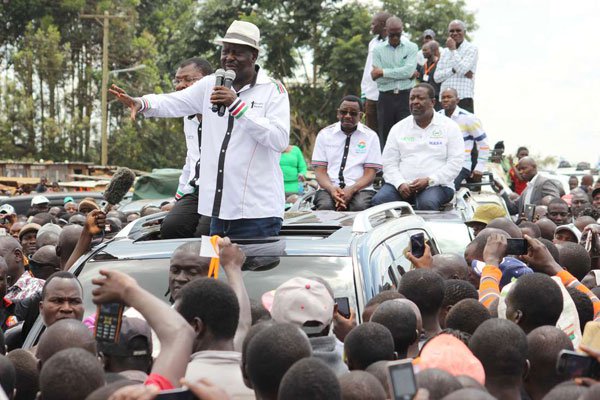 Opposition leader Raila Odinga on Sunday postponed his controversial swearing-in ceremony, slated for Tuesday, following the intervention of foreign diplomats and an internal push to drop the tag of violence that has marked his push for electoral justice.

The ceremony, we learnt on Sunday evening, would have taken place at Tononoka Grounds in Mombasa County as area Governor Hassan Joho had offered to host Mr Odinga and his team.

Nasa co-principal Musalia Mudavadi announced the surprise about-turn on Sunday at Okoa Kenya offices in Nairobi but said he would make public the reasons for the move on Monday. Mr Mudavadi cited internal, national and international interventions as the reasons behind the decision.

“Following extensive internal consultations and engagement with a wide range of national and international interlocutors, the Nasa leadership wishes to advise the Nasa fraternity and the general public that the swearing in of Rt Hon Raila Amolo Odinga and His Excellency Stephen Kalonzo Musyoka as President and Deputy President of the Republic of Kenya, and the launch of The People’s Assembly, scheduled for Tuesday, December 12, have been postponed to a later date,” he said.

Nasa supporters are likely to be taken aback by the announcement, with members of the committee largely made of experts in different fields who were organising the “swearing-in” ceremony divided at the turn of events.

But Mr Mudavadi assured Nasa supporters that “our resolve has not changed”.

“We are aware that this will be a disappointment to the people of Kenya who were eagerly waiting for this occasion,” said Mr Mudavadi. “Specifically, we wish to reiterate that any national dialogue must have electoral justice on the agenda. We are not interested in sharing illegitimate dictatorial power.”

However, sources within the coalition told the Nation that some top Nasa leaders had expressed concern that, already, tens of people have been killed in protests since the August 8 elections, and that the coalition was being linked to violence.

The decision to abort the ceremony, it was understood, was to avoid any confrontations and show the world that Nasa was pushing for reforms without causing chaos.

“It was meant to send a signal to the world that we are not unreasonable people, and to show that Nasa is not made up of anarchists. A lot of people have died,” said a member of the organising committee who sought anonymity.

Nasa now hopes that Western diplomats, who played a big role in the about-turn, will exert pressure on President Uhuru Kenyatta and his deputy William Ruto to hold dialogue with the opposition. President Kenyatta has, however, ruled out any talks.

Western envoys, including Robert Godec (United States), Nic Hailey (United Kingdom) and Jutta Frasch (Germany), are pushing for talks between Nasa and Jubilee to end a political stalemate now in its fourth month. Church leaders have also taken the same position, urging the two sides to drop their hardline positions and engage in talks to bring about reforms.

Mr Mudavadi, in a bid to assure Nasa supporters that the fight is still on, said the coalition will announce new dates of both the swearing-in ceremony and the launch of the People’s Assembly, as well as a more vigorous and prolonged resistance to Mr Kenyatta’s government in the coming days.

“We want to assure Kenyans that we remain fully on course in pursuit of electoral justice. Our resistance of dictatorship is resolute and irreversible. We remind the Nasa fraternity to maintain our civic and economic resistance. There are only two options — democracy or self-determination,” he said.

Later, a member the organising committee tasked with preparing the modalities for the launch of the people’s assembly, speaking exclusively to the Nation, said that the committee felt wasted.

“I feel lost because all the work we have been doing here has come to naught,” he said.

Earlier in the day police had remained tight-lipped regarding security arrangements for Tuesday’s Jamhuri Day celebrations, whose lustre would have been affected by Mr Odinga’s swearing-in.

Police spokesman George Kinoti, Nairobi County Police Commander Japhet Koome, and Inspector-General of Police Joseph Boinnet did not pick up calls or respond to messages concerning the arrangements. Some junior officers told the Nation that the police had only laid down an elaborate security plan for the Kasarani stadium Jamhuri Day fete and ignored Mr Odinga’s purported swearing-in as Nasa had not communicated the venue.

On Friday, Mr Boinnet said the police were ready to enforce Attorney-General Githu Muigai’s warning to Nasa that swearing in Mr Odinga as ‘The People’s President” would amount to treason.