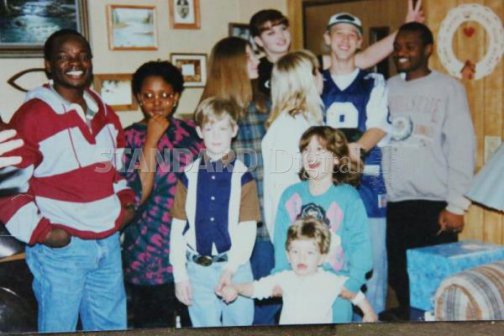 Thad Omari (left) with some of his friends from U.S.A. PHOTO BY BENJAMIN SAKWA

A family from Sasala village, Butsotso Kakamega is waiting for the return of their loved one who left home in 1992 to advance his studies and look for greener pastures in the US.

Thad Omari left behind Everlyne Omari, his wife of nine years, and four children. Although Everlyne last saw her husband 23 years ago, she still remembers her early years with Thad and says her marriage was a joyful one.

“My husband was working at a private clinic in Kitale and he would come home every Friday while we would go to his work place once schools were closed. He used to take the whole family for picnics and at times we would dine out while he ensured that the children’s fees was paid on time,” she says.

Things changed for the Omari family when in 1992, Thad got an opportunity to leave for the US and study medicine and his family was not able to accompany him.

“He had made arrangements for us to travel abroad with him and we had all our documents in order. However, the American Embassy declined our request saying the intended time of stay was too long and we would be forced to change citizenship,” she recalls.

Although disappointed, Everlyne had no objection to her husband travelling alone since his success would mean a better life for the family. Further, this would not be the first time Thad was travelling out of the country. He had first left for Bible studies and then to visit friends and he came back home so she knew he would come back once he finished his studies.

“For the first two years, we kept in constant communication and he would send us money without fail. However, in 1994 all communication ceased and when I tried calling him his line had been disconnected,” she says.

Left on her own, Everlyne struggled to educate the children relying on bursary, cane farming and help from relatives. Seeing them through high school was an uphill task and only one boy was able to go to college.

“He had started constructing a five-bedroom permanent house which he left halfway. The bricks are now falling since I had to stop construction for lack of money to pay workers and buy materials,” she says.

It is difficult for the family to understand why a man who appeared to love them so much would just abandon them and leave them to suffer as they have.

“My instinct tells me he might have married another wife but that should not make him abandon his family. We last talked in 2011 and he sent fees for the last born  for one year with a promise to also see the others through university. This was not to be since the number he used now goes to voice mail,” she says.

Thad now has five grandchildren and just like Everlyne, his children, now grown, still hold on to the hopethat they will one day be reunited with him.

“Being brought up by a single parent is not easy. Our father has really punished us and our mother. But despite this, we still love and miss our dad, we know he is alive and want to see him again,” says Joy Omari, the third born.

Share thisFacebookTwitterPinterestEmailWhatsAppThad Omari (left) with some of his friends from U.S.A. PHOTO BY BENJAMIN SAKWA He Went to the US in 1992, Fell Off the Grid A family from Sasala village, Butsotso Kakamega is waiting for the return of their loved one who left home in 1992 to advance his studies and look for greener