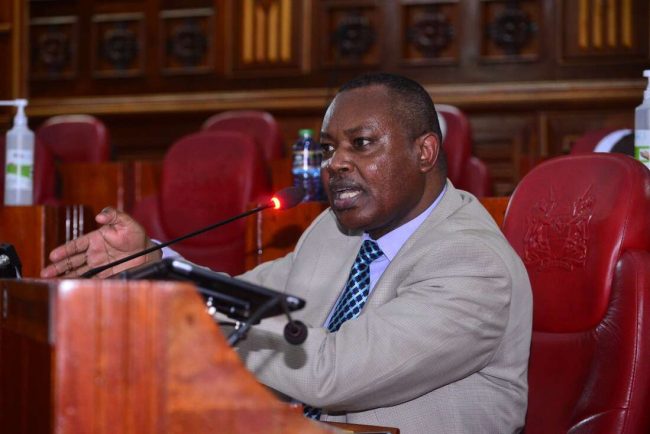 The Director of Criminal Investigations George Kinoti has dismissed a recent expose by Citizen TV dubbed “Guns Galore” as malicious and one aimed at depicting the National Police Service in a bad light.

In the report aired on Sunday night, the station exposed how rogue men in uniform allegedly hire out their guns, uniforms, bulletproof vests, and handcuffs to criminals for as low as Ksh1,000.

But addressing members of the press at the DCI headquarters on Kiambu Road in Nairobi, the police boss denied that guns acquired by the Citizen TV crew led by investigative reporter Purity Mwambia were leased out by policemen.

Kinoti said the firearms, which were surrendered to the police in Kilimani on Monday, April 19, by the crew do not belong to the National Police Service.

“We are the accused. It shows eight items but the AK47 rifle… in all fairness to say it’s police, it would have had an ID or serial number belonging to police,” said Kinoti.

According to Kinoti, the report was meant to discredit NPS.

“The allegations are extremely serious. We shall be asking the editorial director, and other relevant reporters to come and give us more insights to this report in pursuit of criminals harboring the weapons,” said Kinoti.

“The report seemed to be a malicious attempt to discredit the National Police Service; we can only conclude that it was aimed at creating public pandemonium over the management of the security sector.”

A visibly angry Kinoti said an investigation into the matter would be fit only if the media house included the police in the exposé.

“I don’t know why I was not approached to collaborate on the exposé. We never refused to be embedded in your operations. Put us on board, up to now we have no idea of these crimes,” he said.

He also revealed that the directorate had filed a complaint with the Media Council of Kenya against the station.

The exposé sparked a debate on social media with a section of angry Kenyans calling for a mass audit of guns assigned to police officers in the country.

The Directorate of Criminal Investigation full statement herein below:

Guns Exposé was Malicious, It was Meant To Humiliate Police Service Terms DCI Boss Kinoti. Reviewed by samrack on April 20, 2021 .

Guns Exposé was Malicious, It was  Meant To Humiliate Police Service Terms DCI Boss Kinoti. The Director of Criminal Investigations George Kinoti has dismissed a recent expose by Citizen TV dubbed “Guns Galore” as malicious and one aimed at depicting the National Police Service in a bad light. In the report aired on Sunday night, the