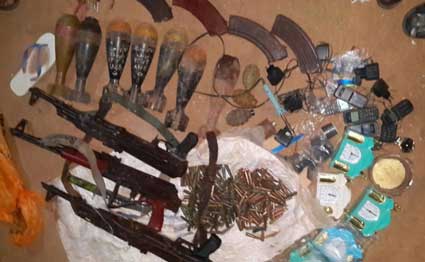 The weapons recovered from a terror suspect who was arrested in Garissa on Wednesday August 26, 2015. PHOTO | COURTESY

Security agencies have Wednesday evening arrested a terror suspect and recovered a cache of firearms and explosives.

This comes just a day after reports emerged that six Tanzanians suspected to be on their way to join Al-Shabaab in Somalia were arrested in Garissa on Sunday.

The Tanzanians aged between 20 and 40 were arrested in Dadaab town, from where they were planning to close into Somalia.

They were also in possession of assorted weapons, according to North-eastern Regional Coordinator Mohamud Saleh.

Guns, explosives seized as police arrest another terror suspect in Garissa Reviewed by samrack on August 27, 2015 .