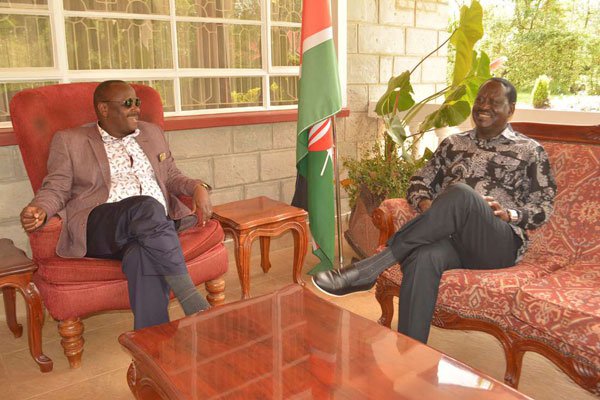 A source close to the four Nasa principals on Sunday confirmed that Mr Ruto and his Chama Cha Mashinani will become part of their coalition with equal status to ODM, Amani National Congress (ANC), Wiper Movement Party and Ford Kenya.

“We are accommodating him (Governor Ruto) on Tuesday (tomorrow). He is coming in at the summit level and will get his full rights as an equal partner in the Nasa coalition,” the source said.

PUBLIC RALLY
“The core principals met last week and ratified the decision to bring him on board. We will first receive him in Nairobi on Tuesday (tomorrow) and later at a public rally,” another source said.

He will nominate two members to the Nasa Coordinating Committee and one member to the coalition’s technical team working on the presidential candidate and structure of government.

Mr Ruto, who rebelled from Jubilee Party and formed his CCM, has been a thorn in the flesh of the government after parting ways with Deputy President William Ruto.

For a while, it was not clear whether he would join the opposition or the government but by last Friday, his mind was made up, according to sources.

Mr Ruto gives Nasa a foothold in the vote-rich Rift Valley, which is now dominated by Jubilee.

The Bomet governor could not be reached to confirm the expected move.

As Nasa prepares to receive an addition to their team, it has emerged that the retreat in Kilifi County which was to take place on Monday could be postponed for a day or two because the National Coordinating Committee has not submitted a full report on the presidential pairing and the structure of government.

“There is no conclusive report which the principals can rely on to make very important decisions,” said a source within the coalition. “We are waiting for a report from the NCC. We cannot go to Kilifi without a report on whose basis the principals will make decisions. The committee was supposed to have met and agreed on the report but we haven’t seen it,” said another source.

The delay, it was understood, was to ensure that the political bases of the four principals do not shift after the announcement which will not only unveil their presidential candidate but the Nasa team for the elections.

UNVEIL TEAM
“The intention of Nasa is to unveil a team, not just a presidential candidate and a running mate. By doing so, they will have cushioned the principals whose names will not be on the ballot paper because their supporters will know what they have got,” another source said.

Various political balloons are being floated from different political camps as the intense competition for the presidential ticket continues.

Mr Odinga has a strong claim to the ticket because of his national stature and government experience, the popularity of his party and his reputed ability to raise funds to run the presidential campaign which requires billions of shillings.

The ODM leader, according to one of the balloons, is prepared to be a “transitional” one-term president, if the opposition wins.

However, this is a difficult promise to sell; it is made by every candidate who needs the support of his peers and is routinely breached.

This appears to be the reason allies of Mr Musyoka have revived the 2013 Cord coalition agreement in which Mr Odinga promised to serve only one term.

National Assembly Minority Leader Francis Nyenze and Wiper chairman David Musila have insisted on the 2013 deal, arguing that it cannot be ignored.

Those close to Mr Odinga say that while he respects what Mr Musyoka’s allies are pushing, he counters that the promise was overtaken by events because Cord lost in the last elections.

This explains the anger of allies of Mr Musyoka, Mr Mudavadi and Mr Wetang’ula after a report was leaked to the media last week pairing Mr Odinga with Mr Musyoka, with the latter as the running mate.

YET TO AGREE
The three later came out and declared that Nasa was yet to agree on a presidential candidate and urged Kenyans to be patient.

Sources in the coalition said Mr Musyoka is determined not to run the risk of losing to Jubilee and wants Nasa to field a pair that he believes will send President Kenyatta and his deputy, Mr Ruto, home.

“He doesn’t see the sense of running on a pairing that can lose to the Jubilee team,” said one source.

Mr Musyoka has held meetings with Mr Mudavadi and Mr Wetang’ula with the latest being on Saturday between the Wiper and ANC leaders at the house of a mutual friend. Mr Odinga is out of the country and is expected to arrive today in the evening.

The negotiations have also narrowed down to the position of chief minister for a third principal but which will come with a powerful docket.

“To address the position of the Third Principal it is still possible to create the office of premier (premier secretary) and secretary of interior and homeland security,” says one of the document in circulation in the coalition.

In the talks, sources said, Mr Mudavadi was being proposed for this position, which if agreed, will be the key cog in the running of a Nasa government.

“This will be a powerful position because nothing in the government will happen without the holder being consulted,” said a source.

Other sources said Mr Wetang’ula is being suggested for position of Speaker of the National Assembly Speaker.

But it is understood that a ministerial position in charge of a well-resourced portfolio such as Energy and Petroleum or Transport and Infrastructure would be far more appealing.