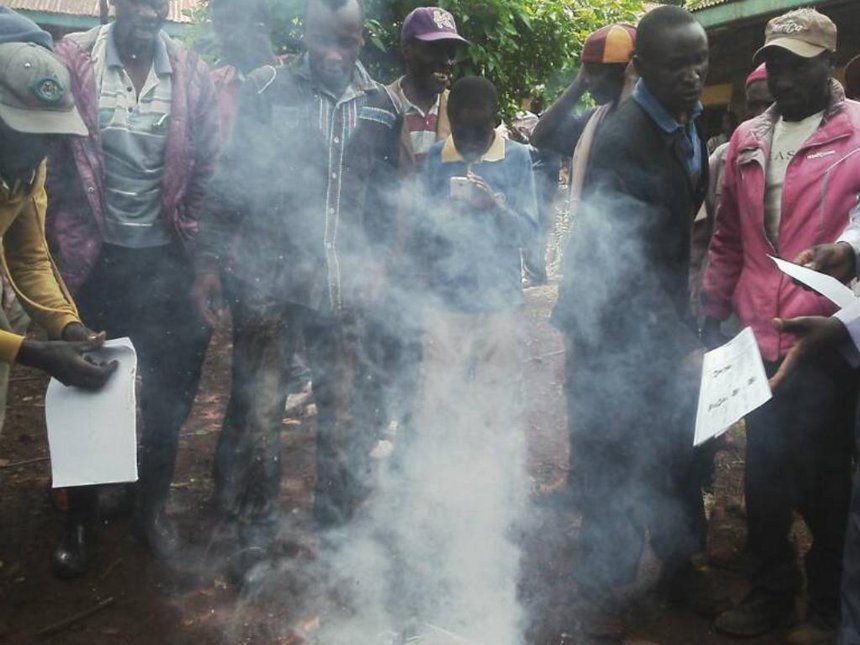 The youths were agitated after the names of eight MCA aspirants were missing from the ballot papers.

They claimed it was a plot to rig the polls.

Primaries in the county kicked off at 7am following the botched process last Friday.

But there were anomalies at Karia polling centre in Kirinyaga central constituency amid allegations that voting was taking place at the home of a county government employee identified as Mr Munyi.

At Kaitheri polling centre, some voters were turned away because their names were missing from the register.

Kerugoya MCA aspirant James Kamau asked for the primaries to be called off due to the irregularities.

But Jubilee’s county coordinator Martin Mwangi said he was not aware of irregularities and promised to call back once investigated.

By press time, Mwangi was yet to respond to calls and texts, while Jubilee’s county chair John Mithamo did not pick calls.

Kirinyaga county is a hotly contested zone as it is President Uhuru Kenyatta’s stronghold.

During the failed primaries last Friday, youths stormed a polling station where former Devolution CS Anne Waiguru was to cast her vote.

Waiguru protested and accused Ndathi of attempting to rig her out.

Share thisFacebookTwitterPinterestEmailWhatsAppPhoto Courtesy Governor Ndathi fails to vote as Kirinyaga youths burn Jubilee ballot papers Kirinyaga Governor Joseph Ndathi did not vote in Jubilee Party primaries as angry youths burnt voting materials at his polling centre in Rukenya Primary school. The youths were agitated after the names of eight MCA aspirants were missing from the