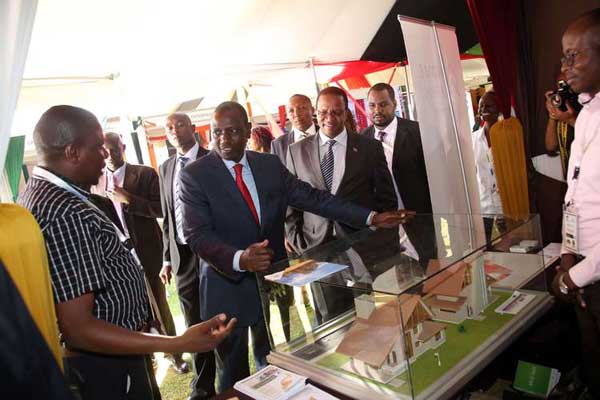 Deputy President William Ruto admires an architectural housemodel at an exhibitions display during the Kenya Diaspora Easter Investment Conference at Windsor Golf Hotel , Nairobi on April 2, 2015. The government, private sector and social groups have line up events to capitalise on the Diaspora during the Christmas season. PHOTO | PSCU

By any standards, Linda Stewart Jalang’o is a go-getter whose fame as the proprietor of MotoMoto Kitchen, an outside catering business, is well established among Kenyans living in the US.

But as this single mother of one son makes final preparations to travel to Nairobi to introduce her cooking business to Kenya during the Diaspora Home-fest, one cannot help noticing the anxiety in her demeanour.

“To be honest, I’m very anxious because in the first place it’s just overwhelming planning a trip to Kenya. But I’m also anxious because I don’t know how Kenyans are going to receive my cooking,” she says. The Diaspora Home-fest will be at the Impala Grounds on December 11.

Speaking to Sunday Nation at her home in Bear, Delaware, Linda is, however, categorical that the excitement and anticipation associated with the prospects of her homecoming trample her anxieties.

“I just feel privileged and blessed to be going to Kenya for my end of the year vacation. I know there are many Kenyans living abroad who, even though have the resources and means can’t make such a trip because their immigration papers are not in order,” she says.

Ms Jalang’o is one of the hundreds of Kenyans living abroad who have either travelled or are making plans to travel not only to join their friends and families in the end-of-year festivities but also to look for investment opportunities.

Many increasingly feel that the 2010 Constitution has created an environment that enables them to be more involved in Kenya’s socio-economic and political affairs.

And to capitalise on their short presence in the country, the government, private sector and social groups have lined up workshops, meetings and social events targeting the Diaspora.

The Diaspora Home-coming event to be held at Daystar University on December 9-11, is being organised by Kenya Diaspora Alliance (KDA) and will dwell on networking, investments and representation among other topical issues touching on the country’s economy and politics.

The Kenya Diaspora Home-fest is a social event to create a forum to share experiences.

The government, through the ministry of Foreign Affairs, is also organising a Diaspora homecoming reception at Safari Park Hotel on December 21-22.

According to Mr Washington Oloo, the Director of Diaspora Affairs, the event follows a similar one held at the same venue early this year and is meant to deepen Diaspora participation in national development.

“The government has invited over 300 participants to the event that will officially be opened by Deputy President William Ruto,” says Mr Oloo.

The private sector in Kenya is also keen to cash in.

Ms Martha Karau, a Director at Kings Pride Properties in charge of Diaspora Homes Expo and Outreach programme, says the company is making special arrangements for those visiting in December.

“They are coming in large numbers and beyond spending time with friends and families, they also want to invest,” Ms Karau said.

One of the special arrangements is paying airline tickets for some of the company’s customers.

“We are calling this special end of the year promotion targeting the Diaspora with a “sweet-heart deal” meant to encourage them to not only purchase our properties but also make them come back home as tourists to spur economic development,” Ms Karau says.

Optiven Property Dealers and Developers in Nairobi is also running a promotion targeting the Diaspora.

Share thisFacebookTwitterPinterestEmailWhatsAppDeputy President William Ruto admires an architectural housemodel at an exhibitions display during the Kenya Diaspora Easter Investment Conference at Windsor Golf Hotel , Nairobi on April 2, 2015. The government, private sector and social groups have line up events to capitalise on the Diaspora during the Christmas season. PHOTO | PSCU Government courts