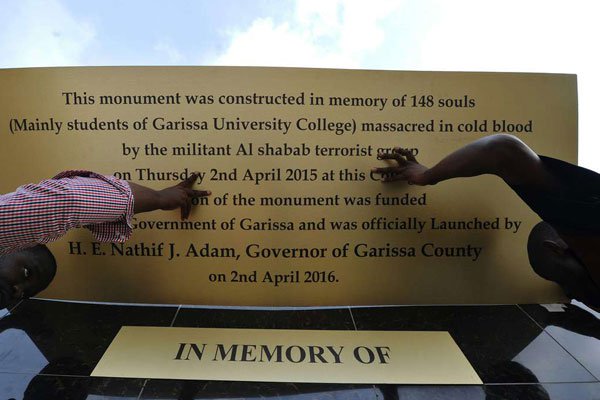 Garissa University College will not hold any event to commemorate the third anniversary of the April 2, 2015 terror attack at the institution by Al-Shabaab militants.

The university held memorials to mark the past two anniversaries, but Vice-Chancellor Ahmed Osman Warfa said the events only bring back bad memories of the incident.

“We are not doing any event this time round; it only reminds us of that fateful day,” Prof Warfa, who was the institution’s principal during the attack, said.

The incident claimed the lives of 148 people, most of them students.

GUNSHOTS
The past two memorials were characterised by prayers for the victims.

In last year’s commemoration, a group of youth organised a marathon to remember those who perished in the attack.

In an interview with the Sunday Nation, Prof Warfa recalled how he heard the first gunshot at about 5.40am when he was about to go to the mosque for fajr (morning) prayers.

“I immediately called a police officer who was within the institution, who had equally heard the gunshots. He starting firing from the hostels where he was but the gunshots from the gate got intense,” he said.

SECURITY
He recalled that there was an unusual power outage on the night of the attack.

Prof Warfa said there were seven watchmen on duty that fateful night, stationed at different points within the university.

The one at the gate refused to open for the intruders who shot him dead to gain entry.

The VC expressed regret that young students had their lives ended in the most tragic way in the hands of people driven by extremist ideology.

“We will never forget them,” he said.

The VC said the government has enhanced security at the institution by building a police station inside the university.

They have also built a perimeter wall around the institution and they are about to finish construction of watchtowers and installation of CCTV cameras.

A biometric gadget that has details of all students and staff at the university has been installed at the gate.

The gadget is manned by Administration Police officers and private security guards.

Vehicles are also searched at the entrance and occupants frisked.

Overall, the government has enhanced security in North Eastern region with the appointment of former ambassador Mohamud Saleh as the regional commissioner after the attack.

COMMUNITY POLICING
Although there have been attacks that resulted from Improvised Explosive Devices (IEDs) that have claimed lives of security officers in areas near the border, there have not been major attacks in the towns.
Government officials attribute the decrease in terror attacks in the county to enhanced public cooperation with security agencies and the sharing of information.

“Members of the public have shared with us information that has led to the arrest of suspects. This is because we have boosted their confidence in security agencies,” Mr Saleh said in a recent interview.

In doing so, the President said he was sending a message to the terror group that Kenya will not succumb to its actions.

Prof Warfa said the President’s action has emboldened the university to pursue its mission.

He said the university has a total of 1,193 students, of whom about 400 are government-sponsored.

Garissa University rules out memorial for attack victims Reviewed by samrack on April 1, 2018 .

Garissa University rules out memorial for attack victims Garissa University College will not hold any event to commemorate the third anniversary of the April 2, 2015 terror attack at the institution by Al-Shabaab militants. The university held memorials to mark the past two anniversaries, but Vice-Chancellor Ahmed Osman Warfa said the events only bring back