From watchman to pilot in 10 years 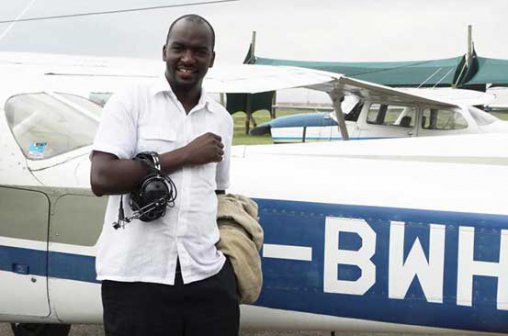 Gordon at Wilson airport where he took flying classes

From watchman to pilot in 10 years

NAIROBI: On February 29, 2016, when Gordon Okumu will be boarding a plane to California, US, nothing about him will tell of his days as a security guard in Loresho estate, gate number 148.

Growing up in Kangemi, Nairobi, Gordon had known little outside the hand-to-mouth way of life. The situation would become even worse when his mother, a single parent, died in 2004. “I was a form three student when she died. Before first term was out she was no more. My sister was offered the position our mother left at her place of work. Even so, the salary was too little for our family of four – three brothers and a sister,” Gordon recalls. Despite the odds Gordon held stoically onto hope. Happy to be alive and ready to fight, he applied for a security guard’s position and when the school’s second term begun, his application was accepted. It is a job that he took in stride, attending classes during the day then donning the uniform, boots and a club at night. “I read and revised at work. Every minute I could afford to flip a page I would utilise it,” he says. See also: Maranda principal denies forcing students to repeat He slept intermittently in between hours of keeping vigil. Morning would come and he would sign off for home then rush to school. This juggling continued until he cleared his Form Four. At which point his friends in Kangemi advised him to apply for a job at a security company that offers services to corporates. They said not only did he have the experience, but his height and physique would make a good case for him. He seriously considered taking their advice until KCSE results came out. Gordon, the gate man, had scored a B+. “I thought to myself, with a B+ I can get a better job than just being a watchman”. Indeed he was right as he was offered a position as an untrained English and CRE teacher at St Martin’s Girls in Kangemi. He held onto this job for one term until August 2006 when he joined the Jesuits Society of Jesus, a Catholic sect – his main aim being priesthood. He lived with the society in Tanzania between 2006 and 2010. “I left the Jesuits when I realised it was not my calling. And no, it was not because a beautiful girl had caught my eye. I just felt out of place,” he says.

Even though he left, Jesuits gifted him with a scholarship. He joined Multimedia University in Rongai to study Communication.

“I finished my studies in 2012. Finding a job was difficult and so I opened my own media company. It did not take off as anticipated and I had to shut it down,” he says. His big break came when he was offered the position of marketing manager at Waumini Communications, belonging to the Catholic Church in Kenya. In 2014, Gordon looked up in the sky and saw an aircraft, a view that jolted his mind back to his childhood days when he fancied being a pilot. A seemingly ridiculous idea crossed his mind: “Why not study to become a pilot.” It was a wild dream, he realised. But with each passing day, the desire grew bigger. Eventually, he signed up for classes at Wilson airport. He used his salary to pay for flying lessons, costing Sh17,500 for every one hour, and many are the times he would have to defer his lessons due to lack of money. He however, remained determined scrimping and saving – pulling together every available shilling to pay for his flying lessons. See also: Maranda principal denies forcing students to repeat To receive the first pilot license, the Private Pilot License (PPL), one must have cloaked 40 flight hours. This was Gordon’s first step when he started on April 2014 and he got the PPL on August 2014 then embarked on getting the Commercial Pilot License which requires one to have 200 hours and he realised this milestone in June 2015. Hope, faith and hard work would once again serve him well a few months later when he was chosen, to be among a small team of Catholics from Kenya, to attend the World Meeting of Families in Philadelphia, USA. “I called my Jesuit friends and they agreed to host me for the period of time I would be in America,” he says. While in California, with 214 flight hours under his wing, Gordon sought for and was accredited with an international pilot’s license that now enables him to fly anywhere in the world. To achieve this fete, he was subjected to a rigorous ten-hour flight where he was asked to perform diverse air maneuvers. With this license, he applied for a position as a pilot with a leading airline in America and got the job – he reports in May 2016 and hopes to have added onto the 640 flight hours he now has. “I do not believe in luck. But I believe in prayer and hard work. That is how I have risen from despair to where I am today,” he says.
Will he become an American citizen? “No. I will come back. Kenya will always be my home,” he says.

And when that happens it will partly be because he has political ambitions: To vie for a parliamentary position come 2022 in Suna West constituency, Migori County, where he traces his roots.
Read more at: http://www.standardmedia.co.ke/lifestyle/article/2000187912/from-watchman-to-pilot-in-10-years?articleID=2000187912&story_title=from-watchman-to-pilot-in-10-years&pageNo=3

Gordon at Wilson airport where he took flying classes From watchman to pilot in 10 years NAIROBI: On February 29, 2016, when Gordon Okumu will be boarding a plane to California, US, nothing about him will tell of his days as a security guard in Loresho estate, gate number 148. Growing up in Kangemi, Nairobi,