From an altar boy to sailing in troubled waters 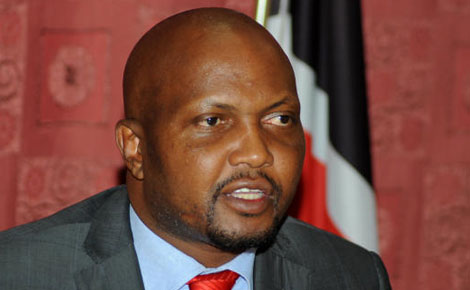 From an altar boy to sailing in troubled waters

The National Cohesion and Integration Commission has called for his arrest. The Director of Public Prosecutions has asked that his bail in a related case be cancelled. And the #arrestKuria hashtag has been trending for days.

Even after he was interrogated by criminal investigation officers for four hours on Thursday, Gatundu South MP Moses Kuria defiantly walked out, blaming everybody else but his tongue for his latest brush with the law.

To his critics, Mr Kuria is an acid-tongued tribalist, who should be in jail. But to his admirers, he is a dependable gladiator in a fierce political arena who draws the Opposition’s first blood.

His latest troubles arise from his utterances at a recruitment drive for youths to work on National Youth Service projects in his constituency.

He was captured on camera telling the panga-wielding youths to attack anyone who opposes NYS projects and Devolution Cabinet Secretary Anne Waiguru, under whose docket the service falls.

Some in the Opposition have been clamouring for her to step down alleging that tenders were awarded irregularly under her watch, and citing the ‘‘attempted theft” of Sh800 million. She has denied the claims.

And Mr Kuria saw the attack on Ms Waiguru and the NYS as an affront on the President, who is one of his constituents.

Immediately after his remarks were aired on TV, Mr Kuria was in hot water.

The Opposition called for his resignation and asked that he be charged with incitement. But most of the pressure came from social media. Rarely does an ordinary MP trend on both Twitter and Facebook. The #arrestKuria hashtag was the trending topic on social media for two days this week.

After the questioning, he issued what was considered a half-hearted apology, in which he blamed others, including the media, for his tribulations.

“The truth will set me free and I hope justice will be done,” said Mr Kuria

This is not the first time the MP is facing incitement charges.

In May last year, when he was just a TNA activist, Mr Kuria landed in trouble after he accused two communities of allegedly being behind a terrorist attack at the Gikomba open air market. He denied it.

“I never mentioned any Luo or Somali communities. I just predicted that if violence continues, victims might take the law into their hands. I am an analyst. I predict events. If I tell you the speed with which you drive is likely to cause an accident, am I trying to cause an accident or just warning you?” he told a weekly paper.

ODM leader Raila Odinga has been a target of his sharp tongue. Soon after the former Prime Minister returned from the US after being away for two months, Kuria accused him of being used by Americans to stage an Arab-spring like revolution in Kenya.

Blogger Robert Alai at one time accused Mr Kuria of plotting to kill him.

It was not lost on many observers that Mr Alai was one of the backers of the #arrestKuria hashtags and implored on his social media supporters to join the campaign last week.

Last year, the MP deactivated his social media accounts after he was almost charged over his posts on circumcision. The cohesion commission dropped plans to charge him after he publicly apologised.

Kuria’s rebelliousness started early. Born 47 years ago in Gatundu South, he was an altar boy at Gatundu Catholic Church when he was in primary school.

He was expelled from Ituru Secondary School and sat his final-year exams at home. Mr Kuria holds a Bachelor of Commerce degree from the University of Nairobi.

He dabbled in student politics and was the treasurer of Sonu, the students association. After graduation, he worked as an auditor at Githongo & Co and Total Kenya.

The father of two has also worked for Standard Chartered Bank and Al Rajhi, an Islamic bank in Saudi Arabia, and then returned home. So, why did he return to Kenya?

“I was an admirer of President Kibaki. After learning he was besieged in 2007, I came back. I did not want him to lose to a socialist,” he said in a previous interview. President Kibaki won the 2007 elections.

Kuria joined the then Party of National Unity through Kanu, which was led by Mr Uhuru Kenyatta.

Many people now say the law is being applied selectively with regard to him.

From an altar boy to sailing in troubled waters Reviewed by samrack on July 11, 2015 .

Share thisFacebookTwitterPinterestEmailWhatsAppGatundu South Member of Parliament Moses Kuria From an altar boy to sailing in troubled waters The National Cohesion and Integration Commission has called for his arrest. The Director of Public Prosecutions has asked that his bail in a related case be cancelled. And the #arrestKuria hashtag has been trending for days. Even after