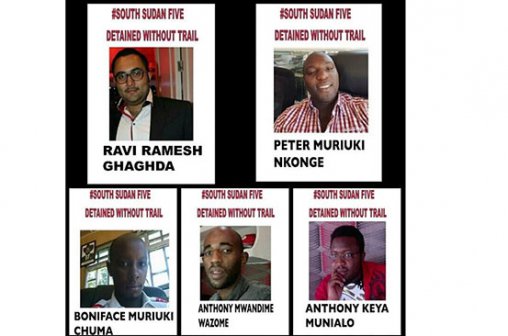 NAIROBI: A journey for greener pastures in South Sudan has turned into a nightmare for four Kenyans. When they left Kenya to go and work for a small technology company in Africa’s youngest nation, Anthony Keya, Boniface Muriuki, Ravi Ghaghda and Anthony Mwadime never knew they’d be caught up in a vicious business fight that has now seen them condemned to life in prison. The charge? The four Kenyans, and their boss, plus 11 other South Sudanese allegedly conned President Salva Kiir! The four Kenyans have now been jailed for life for what the court saidwas an attempt to defraud Kiir’s office in the capital Juba of Sh1.4 billion ($14 million). Their arrest and conviction paints a picture of business rivalry among South Sudanese siblings gone wrong – with Kenyans caught in the middle, and now, paying for it.

Their families, after nearly a year fighting the conviction, have turned to President Uhuru Kenyatta’s Government to help secure their released. The four were represented in the forgery suit by a South Sudanese lawyer. Their families back in Kenya are protesting the hefty punishment handed by a High Court in Juba last week, saying their kin were not given a fair hearing. The ruling barred the filing of an appeal within 30 days, as the sentence has to be submitted to the Supreme Court for a procedural confirmation. Several lawyers, who had taken up the matter, promptly dropped it, citing possible intimidation. The four Kenyans and the South Sudanese were all employees of Click technologies, a small technology retailer that sold electronic equipment including cameras to the State. Security Officer The company was owned by John Agou, a former security officer in South Sudan’s presidency, and his wife Anyeth Chat Bor. Mr Agou was accused of conspiring with his employees to swindle the Office of the President of South Sudan and other ministries, where the firm is accused of receiving payments for no deliveries made.  He is also said to have forged the presidential seal in an attempt to withdraw the funds
from the Treasury of the young nation, which is already facing a biting shortage of foreign currencies. The charges read out in court indicate the employees conspired with their boss to make the presidential seal with the intent to defraud.
Source: http://www.standardmedia.co.ke

Four Kenyans jailed for life in South Sudan cry for justice Reviewed by samrack on June 21, 2016 .

Share thisFacebookTwitterPinterestEmailWhatsAppFour Kenyans jailed for life in South Sudan cry for justice NAIROBI: A journey for greener pastures in South Sudan has turned into a nightmare for four Kenyans. When they left Kenya to go and work for a small technology company in Africa’s youngest nation, Anthony Keya, Boniface Muriuki, Ravi Ghaghda and Anthony Mwadime