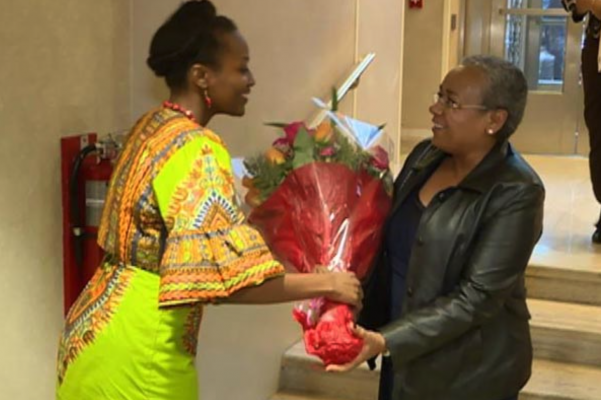 NEW YORK, USA, 11 March 2015 (PSCU) – First Lady Margaret Kenyatta has arrived in New York, United States of America, to join other world leaders for the fifty-ninth session of the Commission on the Status of Women (CSW).

The meeting is taking place at United Nations Headquarters in New York from 9th to 20th March 2015. Representatives of Member States, UN entities, Economic and Social Council (ECOSOC) and accredited non-governmental organizations (NGOs) from all regions of the world are attending the session.

The main focus of the session will be on the Beijing Declaration and Platform for Action, including current challenges that affect its implementation and the achievement of gender equality and the empowerment of women.

The Commission will undertake a review of progress made in the implementation of the Beijing Declaration and Platform for Action, 20 years after its adoption at the Fourth World Conference on Women in 1995.

The review (Beijing+20) will also include the outcomes of the 23rd special session of the General Assembly, the first five-year assessment conducted after the adoption of the Platform for Action, which highlighted further actions and initiatives.

The session will also address opportunities for achieving gender equality and the empowerment of women in the post-2015 development agenda.

On arrival in New York, the First Lady and her delegation was received by among others Cabinet Secretary for Devolution and Planning, Anne Waiguru, Kenya’s Permanent Representative to the United Nations, Ambassador Macharia Kamau and Kenya’s Ambassador to the United States of America, Njeru Githae.

First Lady Arrives in New York for 59th Session of the CSW Reviewed by samrack on March 12, 2015 .