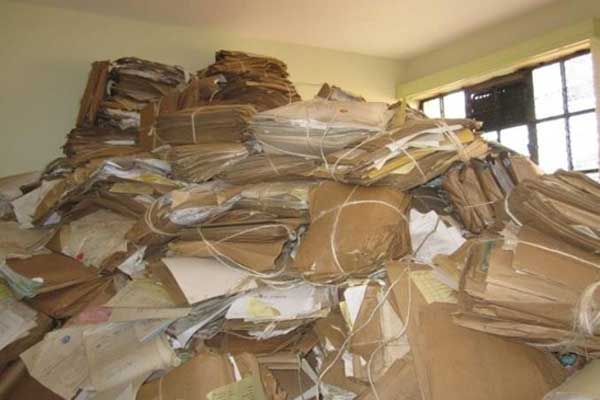 Digitisation is disrupting the way we work, improving governance and enhancing inclusivity across the globe.

Though it makes certain kinds of work extinct, it is expanding horizons in ways we have not yet registered in our minds.

Past resistance to changes brought about by digitisation, especially in the public sector, is easing.

The Lands Ministry is the latest centrepiece in the digitisation landscape in Kenya. Since 1890, when the first land register was created in Kenya, we have used manual systems, cumbersome procedures and practices.

Land records and other data sets were uncoordinated. Unscrupulous individuals took advantage of the massive inefficiency and began to steal land from rightful owners. The government lost revenue through multiple leakages and lands offices throughout the country became veritable dens of corruption.

Not anymore. We have made great strides towards ensuring a well-defined property rights regime that is critical for realising the benefits of market exchange. At a Vision 2030 workshop in Naivasha last week, officials from the Ministry of Lands showcased what they have been doing to become more efficient and responsive to citizen demands.

To say the least, what they have done so far surpasses public expectations. Quietly, they have built acomputer-based Land Information Systemsupported by geographically referenced data sets, re-engineered their business processes, developed a National Spatial Plan (NSP) and are in the process of finalising a National Spatial Data Infrastructure.

These developments, even though only halfway done, will spur new entrepreneurial opportunities if an effective enforcement mechanism is adopted.

In 18 of the 57 regions, the online portal is up and running. It integrates paper records in four technical departments, creating a platform that enables customers to access services seamlessly. These flexible, reliable and secure databases give the people a clear view of land administration, management and spatial representation.

It is such efforts that give people hope that Vision 2030 is not a pipe dream but a reality. Virtually all Vision 2030 targets are part of the Sustainable Development Goals (SDGs) that we hope to achieve by 2030.

It will enhance Kenya’s global competitiveness by reducing the cost of production, diversification and value addition, transform the country from an agro-based industrial economy and achieve and sustain efficiency in resource use.

It will enable increased access to opportunities through integrated infrastructure networks, leading to enhanced social security and cohesion.

The benefits of planning right are many. We can finally begin to see increasing job creation and poverty reduction as well as the emergence of national self-sufficiency. With NSP, it will be possible to achieve the elusive 10 per cent forest cover and restore water catchment areas, provide avenues for a clean healthy environment and adapt to the effects of climate change.

We can re-engineer urban growth and promote coordinated human settlements and get clean, adequate energy for industrial and domestic use to spur social and economic growth.

The last time we automated the lands banking hall, revenue jumped from Sh800 million to Sh9 billion in a year. I estimated that once the backend work is done, the Lands Ministry revenue could top $1 billion.

Improved record keeping correlates positively with revenue generation, in the process reducing corruption and data manipulation, due to non-face-to-face interaction.

It also creates a better image of government, improves tracking of records and enables faster decision-making with electronically referenced documents.

Perhaps more important is the correction of one major headache at the Lands offices: missing files.

This will now be a thing of the past since improved storage and retrieval of information creates shorter search timelines and simpler work environment, with higher confidence levels.

It is possible that with good revenue generation, the government can afford to pay living wages, hence improving workforce motivation.

This automation would not have happened without political and executive goodwill, enactment of new land laws, improved access to development partners’ resources and strong commitment in public sector reforms towards meeting Vision 2030 goals.

Success in the public sector is driven by multiple initiatives sometimes working in parallel and once they are integrated, they unravel wide-scale benefits to the citizenry.

Much more could be realised from the National Optic Fibre Broadband Infrastructure but it takes time to gain acceptance.

As a result of digitisation, the ministry has converted registration and issuance of analogue title deeds to digital title deeds.

What this means is that the business environment will transform as soon as the public begins to enjoy these new services.

It means the banks will take a shorter period to charge and transfer property, and that the lawyers would perhaps – I hope – cease charging title search fees.

Lease owners will query and pay for land rent due througheCitizenand download the clearance certificate.

While Jubilee’s promise of providing a solution to the land question in Kenya has not been fully met, there is no denying that the government has made unmistakable progress in this area.

Someone in Jubilee must have read Hernando de Soto’s book The Mystery of Capital: Why Capitalism Triumphs in the West and Fails Everywhere Else, which shows the vital role that legally registered land can play in an economy.

However, the ministry still has some challenges to overcome, including lean infrastructure and equipment for an e-platform, and a lingering silo mentality, given the fact that some systems within the ministry are still not integrated, owing to resistance.

Other challenges include slow adoption of ICT due to lack of comprehensive sensitisation and low skill levels, particularly e-literacy, though the ministry has highly qualified and technical staff and spaces that cannot host e-infrastructure

There are also logistical constraints as the registries are in 57 locations countrywide and links to data sets are held by various government agencies, some of which are not yet fully developed or in useful formats.

This achievement is still vulnerable to attacks from corrupt mandarins who hang around the ministry to steal from innocent citizens. But it must be read positively for what it is: a chance to get rid of corruption in one of the areas that has been leading in the corruption index.

The private sector, as well as ordinary citizens, must urge the government to invest sufficiently in the ministry as a strategy to create new enterprises, new jobs and a new narrative against corruption.

We can invest all the money in anti-corruption agencies but they will never reduce corruption as much as digitisation is capable of doing.

I hope with resources, the ministry could invest in Blockchain technology to permanently deal a major blow to land grabbers.

Karl Kraus, an Austrian writer and journalist, said, “Corruption is worse than prostitution. The latter might endanger the morals of an individual, the former invariably endangers the morals of the entire country.”

We have a chance in the Lands ministry to rescue our national morals. Let’s do it.

The writer is an associate professor at the University of Nairobi’s School of Business.

Finally, the Kenya lands office is digitised Reviewed by samrack on July 12, 2017 .

Finally, the Kenya lands office is digitised Digitisation is disrupting the way we work, improving governance and enhancing inclusivity across the globe. Though it makes certain kinds of work extinct, it is expanding horizons in ways we have not yet registered in our minds. Past resistance to changes brought about by digitisation, especially in the public