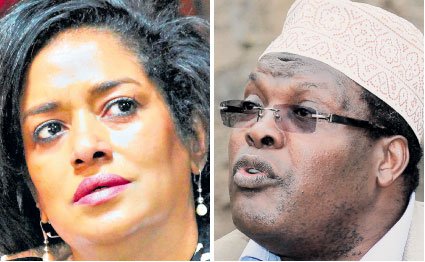 The federation urged the government and the electoral commission to enforce the law and the Electoral Code of Conduct to protect female candidates in the run-up to the polls slated for August 2017.

Ms Mon’gare said the interview demeaned Ms Passaris and other women and should not have been allowed to air.

“We categorically condemn the violence meted out on Ms Passaris … We take great exception [to] the fact that Mr Jeff Koinange, the TV show host of no mean repute, allowed Mr Miguna to [repeatedly] disparage Ms Passaris on … national TV,” she said in a statement.

“The show was not about issues but a personal attack,” she said.

Both Ms Passaris and Mr Miguna are eyeing the Nairobi governor’s seat and, according to Mr Koinange, they had been invited to debate political issues.

But according to Fida-Kenya, the show was full of slanderous, dehumanising and bitter vitriol against Ms Passaris.

“Some words [spoken] by Mr Miguna amount to criminal acts like ‘you are beautiful every man wants to rape you’ in an attempt to discredit her ambitions for the gubernatorial seat,” she said.

Ms Mon’gare said Ms Passaris’ constitutional rights were breached as she was treated in a cruel and dehumanising manner.

Mr Miguna, however, has dismissed a video clip of an exchange between him and Ms Passaris, who did not take the comments lightly.

“You are so sick. You are so jealous and I can’t even look at you really really you are so disgusting,” she said.

The federation also condemned escalating cases of violence against women in their homes, at workplaces and now on live TV shows.

Meanwhile, Nairobi Governor Evans Kidero has filed a complaint with the Media Council against the Standard Media Group over comments made during Mr Koinange’s show.

On November 16, 2016, Dr Kidero states, Mr Koinange hosted Mr Miguna on a show where he accused the governor of being a thief.

Dr Kidero says Mr Koinange failed to adhere to journalistic standards and allowed Mr Miguna to repeatedly malign and libel him as a thief.

Dr Kidero claims such allegations have been made on the show at least four different times, with the alleged encouragement of the host.

“I am writing to you as a custodian of journalist[ic] ethics and standards to look into the issues and take necessary quality assurance,” Dr Kidero says in the petition.

Dr Kidero has failed to appear on the talk show in the past two episodes, which Mr Koinange devoted to aspirants eyeing the Nairobi governor’s seat.

Mr Miguna, a lawyer, is among the aspirants seeking to unseat Dr Kidero in 2017.