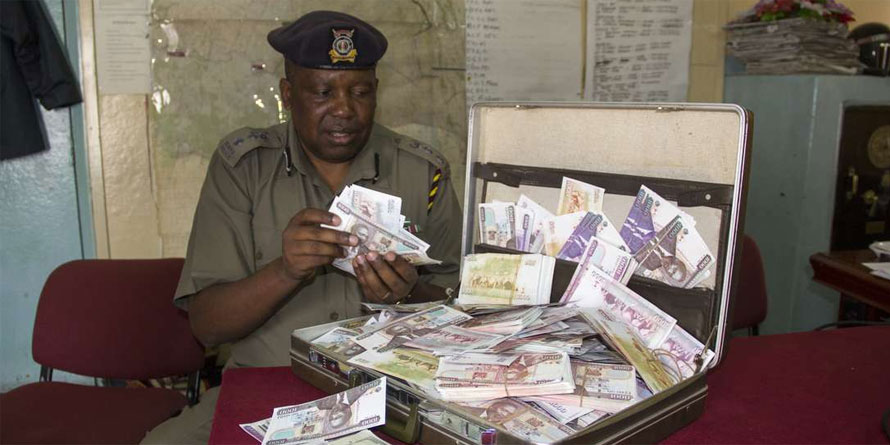 Counterfeit bank notes are the most common form of fraud in Kenya, with mobile money and bank agents being the key targets.

A nationwide survey released recently by the Central Bank of Kenya shows that mobile money agents, who largely consist of M-Pesa agents, had 24,562 cases of counterfeit notes, which is 97 per cent of the fraud cases they face.

Bank agents reported 1,297 cases of fraud out of which 75 per cent involved counterfeit notes.

The six-month survey conducted in 2015 whose findings were released last week by the Central Bank of Kenya, captured 27,196 cases of fraud.

The Central Bank has, however, been reporting that the crime is on the decrease due to the lower number of counterfeit notes submitted to it.

The survey indicates that most victims of counterfeit notes do not report the incident and where duped, they may try to pass on the fake note to other unsuspecting persons.
Fraudsters usually operate in slum areas where cash velocity is especially high during market days, mainly Saturdays.

Vendors are usually alert when handling large denomination notes — Ksh1000 and Ksh500 – in a bid to mitigate huge losses.

Fraudsters do not fake small notes as it does not make economic sense due to the cost of production and risk involved.

Circulation of fake money is expected to pick as Kenya nears its general elections. Aspirants and their handlers dish out the fake notes as they push to lure the public into considering the candidacy.

Early this year a Cameroonian international and four of his accomplices were arrested with fake dollars of over Sh1 billion.

A total of 25,744 incidences of counterfeit notes were captured in the survey conducted across all financial service providers. Counterfeiting was the most common form of fraud as it was cited in all financial sectors with the exemption of pension industry.

Among pension funds forged cheques were the most prominent while false identity stood out in capital markets authority.

A POLICE OFFICER DISPLAYS FAKE MONEY RECOVERED IN AN OPERATION. FILE PHOTO | NMG  Fake bank notes top list of fraud in Kenya Counterfeit bank notes are the most common form of fraud in Kenya, with mobile money and bank agents being the key targets. A nationwide survey released recently by the Central Bank of