Envoys pick four-point agenda as they prepare for talks 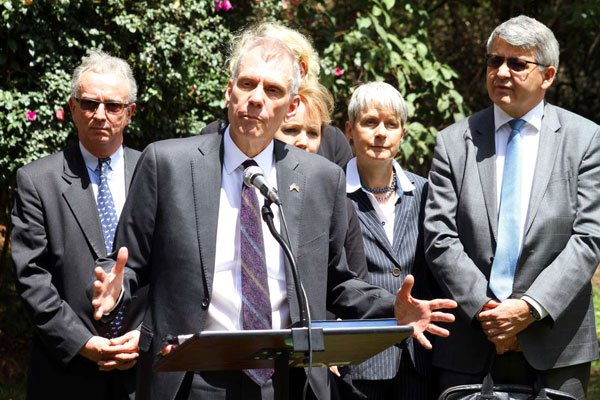 Envoys pick four-point agenda as they prepare for talks

Four key agenda items for Kenya’s national dialogue have been proposed ahead of talks facilitated by diplomats, the clergy, business and trade union leaders.

They are seeking to bring the feuding political camps together to end the deep divisions caused by the prolonged election period.

A concept paper seen by the Nation lists the strengthening of institutions, inclusivity, devolution and good governance as the agenda items that the drivers of the talks want discussed, and hope the two sides of the political divide will accept.

Besides healing the rifts caused by the last elections, resolving these issues is also likely to resolve the agitation for secession by the opposition, the protests over regional exclusion in appointments and also set Kenya on a path to credible elections in 2022.

Momentum for the talks was given impetus by President Uhuru Kenyatta who on Tuesday said that he was willing to talk to the opposition led by Mr Raila Odinga.

Earlier, Mr Odinga had said that he and his allies had suspended his parallel swearing-in to give room for dialogue. However, the two leaders could not agree on what their talks would be about.

The concept paper now sets out issues that would bring the two leaders and their respective allies together as part of the campaign to heal the deep rifts that have divided the country after the August and October elections.

On Thursday Jubilee MPs also rallied behind Dr Oburu Oginga, the elder brother of Mr Odinga, as a nominee for the East African Legislative Assembly, in what was seen as the thawing of hostilities between the two camps.

Leaders from both camps also rejected the nomination of Mr Norman Magaya by Nasa. Mr Magaya was seen as a divisive figure and his combative stance against Jubilee contributed to his rejection in both Houses of the Parliament.

Under strengthening of institutions, the issues to be discussed are likely to include electoral reforms targeting the Independent Electoral and Boundaries Commission.

Mr Odinga has in the past alleged that the commission robbed him of his victory and has demanded that its top leaders be sent home and new ones appointed in their place.

On good governance, the key issues will include reforms of the security agencies, which have been accused of dealing too harshly with opposition supporters, leading to the deaths of dozens during political protests before and after the elections.

The issues under devolution is likely to involve how to make the system work better for Kenyans and this may include increasing the amount of money that the national government allocates to counties and the timeliness with which it does so.

A source in the diplomatic community said the objective of the envoys, mostly from the western nations, is to bring the feuding politicians to the negotiating table.

However, they also hope to bring on board a wide spectrum of representatives from other sectors including the business community, religious leaders, civil society and workers’ representatives.

According to the source, some governors, who have also been approached to be part of the talks, have said that they would want political issues to also be debated. They also said those leading the talks should not expect quick developments but rather progressive consultations.

“Expectations from both sides are far away from each other,” the source said.

He said that while both Jubilee and Nasa leaders have been warming up to talks, there are still concerns about the format that the engagement should take. Jubilee has insisted that only Parliament can lead the discussion but this may leave out key stakeholders, including Nasa leaders who are not Members of Parliament.

The envoys are keen to have the key political leaders pick eminent individuals to represent them once the talks begin. Once this is done, the envoys will take a back seat.

READ: US pushes for dialogue amid political tension in Kenya

“We’ll then set up a secretariat which we will support. But this is about Kenya and it is Kenyans that must talk to each other and find a way forward,” said one of the diplomats who has been involved in the efforts to unite Kenyans after the divisive elections. He and his colleagues yesterday met in Nairobi to strategise more on how to make progress.

In the end, the consultations are aimed at preparing the ground for direct talks between President Kenyatta and Mr Odinga.

At the same time, a number of African leaders are expected in the country next week in what is believed to be part of the multi-prong strategy to bring the two leaders together. However, the number and identities of the leaders was still closely guarded by yesterday although there were indications that President Yoweri Museveni of Uganda would be among them.

Even though the meeting has been organised as a regional parley to focus on integration, a Kenyan diplomat based in Kampala told the Saturday Nation that the meeting will dwell on the political feud in Kenya and that it will explore possibilities of bringing the two leaders together.

“The leaders have been invited by Western diplomats. Yes, there are efforts towards national dialogue in Kenya, but I am not privy to the character of the discussions. But what I can confirm is that regional leaders have been invited and President Museveni will be there,” the diplomat said. “I don’t know who the other leaders on the list are. Even though this is being pushed by the EU, I am not sure whether it is through the African Union or the East African Community.”

Kenya is considered by western powers as a key security and geopolitical ally in Eastern Africa.

Elsewhere, while the National Council of Churches of Kenya (NCCK) leadership acknowledged its participation in the quest for dialogue, it said the push was by individual clerics and not as a group as has been the case before.

“It will be difficult to gauge the progress at this point,” said Canon Margaret Mbogo, the NCCK national chairperson.

A representative of the business community, on the other hand, said a decision had not been reached on whether the business leaders would engage the two protagonists or not.

“We are not able to comment on the question of dialogue,” said Kespa Chief Executive Officer Carole Kariuki.

Mr Cyprian Nyamwamu of the Interreligious Forum also confirmed the existence of behind-the-scenes talks but said there is a sense of resistance because they never solve the underlying political problems.

“The meetings are going on and we are aware of them. We welcome them but we are frustrated because these initiatives never resolve the outstanding issues. We can’t keep on repairing without looking at the engineering designs,” he said.

Central Organisation of Trade Unions (COTU) Secretary-General Francis Atwoli, who has been involved in efforts to get the President and Mr Odinga to talk, accused politicians of grandstanding as Kenyans suffered because of a poorly-performing economy.

“I’ve reached out to the President and his deputy over this matter. I’ve been saying that the two leaders must meet and talk and that not Uhuru, not Raila should give conditions for such talks to happen,” Mr Atwoli said from London.

“If the President had met Raila before the elections, our elections would not have been as expensive as they were. We would not have lost 300 lives. If the two met today, our shilling will appreciate immediately. It will boost investor confidence,” he said.

Envoys pick four-point agenda as they prepare for talks Reviewed by samrack on December 15, 2017 .

US ambassador to Kenya Robert Godec speaks to the press at Bomas, Nairobi on October 2, 2017. PHOTO | DENNIS ONSONGO | NATION MEDIA GROUP    Envoys pick four-point agenda as they prepare for talks Four key agenda items for Kenya’s national dialogue have been proposed ahead of talks facilitated by diplomats, the clergy, business