Very few people can boast of close ties with the first family like Elizabeth Mumbi can. You see Elizabeth Mumbi was President Jomo Kenyatta’s first and only social secretary since the founding father took over the reins of power in 1963 and she held that prestigious position until the demise of the president in 1978. Her autobiography “Miss Uhuru 1963” captures a rich history of her interaction with the first family and includes snippets of her interaction with the current president Uhuru Kenyatta growing up and how she met her husband as they both worked for the first president of Kenya. 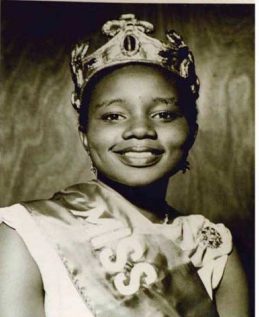 Elizabeth and her family were known to Jomo Kenyatta since Elizabeth was a little girl growing up in Gatundu Kiambu county, he and her dad were close acquaintances way before Kenyatta became president. Her beauty is to behold which explains why she was crowned miss Uhuru on 14th December 1963 in a beauty pageant organized by the Daily Nation and graced by the President and first lady Mama Ngina Kenyatta. This moment was to shape her destiny as thereafter the President himself called her to offer her a job at his office effectively poaching her from her job at Barclays Bank Queensway branch!

An Alliance Girls High School girl, Elizabeth attended price giving days and drove the first children to functions and outings when their parents were serving the nation. It was during her time working at the state house that she met the love of her life Major Marsden Madoka, Kenyatta’s Aide de’ Camp. Their relationship by the way received a stamp of approval from the president himself Elizabeth says. They got married on 6th December 1971 and have been together since then. Upon the death of Mzee Jomo Kenyatta and with Daniel Moi taking over, Elizabeth continued to work at the state house and her retirement brought to an end 22 years of serving the two presidents and a lucrative enviable career as the woman before whose eyes Kenya’s current president grew up. 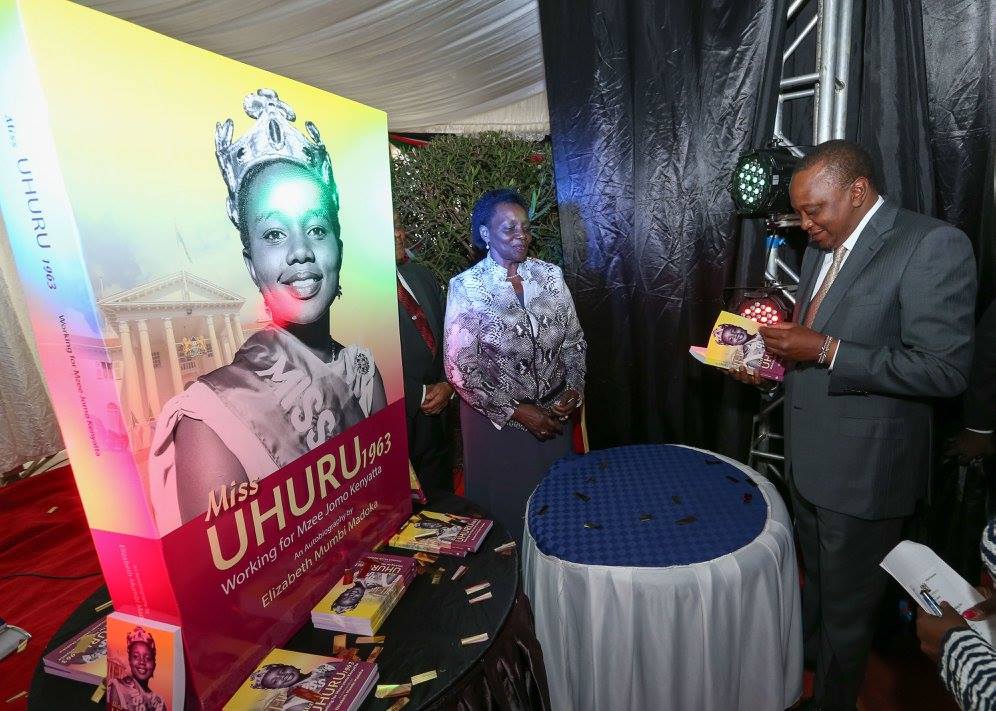 SPEECH BY HIS EXCELLENCY HON. UHURU KENYATTA, C.G.H., PRESIDENT AND COMMANDER IN CHIEF OF THE DEFENCE FORCES OF THE REPUBLIC OF KENYA DURING OFFICIAL LAUNCH OF THE BOOK “MISS UHURU 1963: WORKING FOR MZEE JOMO KENYATTA” AN AUTOBIOGRAPHY BY MRS. ELIZABETH MUMBI MADOKA AT KENYA LITERATURE BUREAU HEADQUARTERS, SOUTH C, NAIROBI

Distinguished Guests, Ladies and Gentlemen, It is a great pleasure and honour for me to visit the Kenya Literature Bureau and to grace the occasion for the launch of the autobiography, “Miss Uhuru 1983: Working for Mzee Jomo Kenyatta” by Elizabeth Mumbi Madoka. I have known Mrs. Madoka and her husband, Maj. (Rtd.) Madoka, since my childhood. She took wonderful care of me,and I am deeply grateful for the love she showed me. Perhaps you will understand what I mean if I tell you of a story she narrates in this Book: she reminds me that I was a curious child, and that I once asked her why police officers guarded my father, for, at that time, I thought they were the same people who arrested him. As she says, I asked many questions and she always tried to answer them as best as she could. Ladies and Gentlemen, That gentle care for a curious child is a measure of the love and care that Mrs. Madoka showed me in my youth, and that is why I am so proud to be here with her as she launches her book. I also celebrate Mrs. Madoka because she has served this Nation faithfully and well.  She served two Presidents, and since she retired from full time public service, in addition to raising her family, she has found time to support her community.  Iam deeply grateful for her selfless service to the Nation since our independence — a service she continues to render even today.  Let me say why. You see, in Kenya, we have not always remembered the lessons of the past.  We have sometimes allowed them to slip through our fingers. In writing this Book, Mrs. Madoka has done her bit to make certain that we remember the lessons of the past, and that we do not lose the wisdom of our elders. We must preserve these vital memories,and I am glad that she has chosen to do so. I am also glad because her life story sets an example worthy of emulation. She served her Nation honourably, and she maintained high standards of order, diligence, and patriotism. Kenyans need to be reminded of stories like hers, so that we remember, always, what we can achieve. Ladies and Gentlemen, The launch of this book at the Kenya Literature Bureau (KLB) is yet another significant milestone since its inception in 1947. The Kenya Literature Bureau is older than independent Kenya, and yet the Bureau remains as vital as ever.  It still publishes low-cost books, and myriad of literary materials, and in many ways, it remains the foundation of Kenya as a reading nation.  In recent years, the Bureau has worked hard to promote local authors. In particular, I want to commend them for their work in preserving our heritage, our history, and our cultures, by their publication of books in vernacular languages.  I am very pleased to see the Bureau’s contribution to the full development of Kenya’s creative ability, and I want to assure youthat my Government will give its full support to your important work. Ladies and Gentlemen,  Let me close by, once again praising Mrs. Madoka’s literary works. In a way, the story told in the Book mirrors the growth and development of the Nation. Mrs. Madoka tells us how she started as a rather shy personality on her entry into the Miss. Uhuru contest. And yet, she gathered her courage, and entered — and she won. She ventured into public service, and, again, she overcame, and grew into the work. In time, she raised a family — indeed, she had a hand in raising me. Now, in publishing the Book, she is passing on the wisdom she has accumulated. Her story tracks the growth and development of this Nation, and it gives me optimism — any Nation that produces patriots like Mrs. Madoka has its best days ahead of it. I thank you. God bless you. God bless Kenya.