Drones vs wheelbarrows: UhuRuto battle for the youth 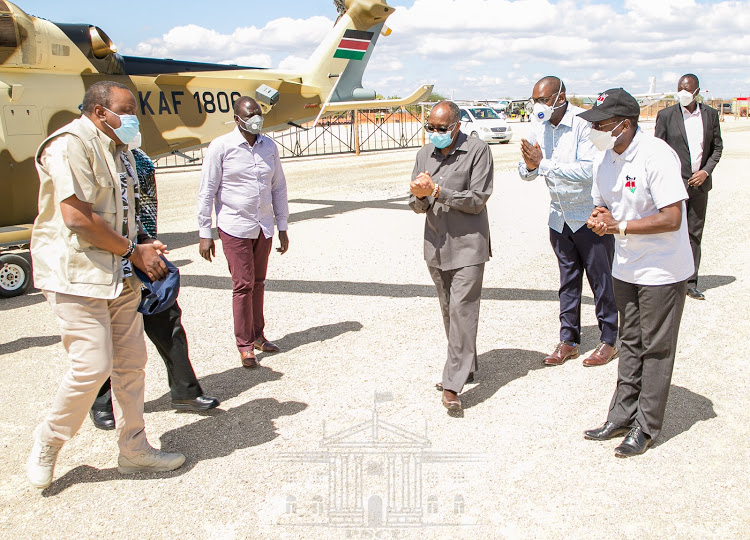 The battle for the youth could be ratcheted up by the BBI campaigns.

Drones vs wheelbarrows: UhuRuto battle for the youth

Allies turned foes President Uhuru Kenyatta and his Deputy President William Ruto are now battling for the control of millions of youth, a key-voting bloc.

The fight pitting the once Dynamic Duo has bow found its way into the Building Bridges Initiative process after the task force made key proposals seen as seeking to appease the youthful generation.

Ruto has been widely targeting the youth with several initiatives aimed at helping them start informal sector businesses.

The hustler narrative powered by wheelbarrows and carts is said to be gaining momentum with the President’s men worried it could pose a major threat to the push to amend the Constitution.

Indicative of the panic in the President’s camp, Uhuru will today meet officials of the Boda Boda Safety Association of Kenya in what is seen as a scheme to counter the DP.

Ruto has fired up his campaigns 2022 on a hustlers vs dynasties platform and has been rallying the youth in the bodaboda sector to reject the push to amend the law of the land.

The 2019 national census data shows Kenya has a youthful population, making the young people a key block in the political battle.

Data from the International Labour Organization statistics show the youth unemployment rate in Kenya stands at 7.27 per cent making them an easy target for politicians.

The DP after being sidelined in the newfound relationship between Uhuru and Raila has packaged his campaign strategy on creating informal sector jobs.

He has cleverly disentangled himself from Jubilee’s 2017 promises and painted the system as having failed to create the millions of promised job.

The President during the Mashujaa Day celebrations at Gusii stadium, Kisii county, gave the clearest indication that he would not let Ruto ran away with the youth agenda.

Uhuru and Raila on Wednesday held a session with hundreds of boda boda riders drawn from Kisii and donated Sh3 million.

Ironically, they have previously criticised Ruto’s harambees and handouts for the youth and boda boda riders.

In his Mashujaa Day speech, the President outlined a raft of measures his government has taken to empower the youth to harness their opportunities through innovation and technology.

His speech delved in detail on the youth and defends his government against accusations that it had ignored them.

“If our attention goes to the bad and the ugly, all energy will flow to the negative and we will become a nation of angry and disillusioned people. But the young people who will embrace the positive and the possible, will emerge as heroes and ‘makers of things’,” the President said.

Uhuru highlighted various programmes and projects undertaken by the young people in the country, urging the youth to dare to dream and step out to take up challenges.

He said a team of over 800 young men and women drawn from across Kenya had undertaken programmes that include the National Wide Airborne Geophysical Survey, the Geospatial Project, the Cyber Project, Drones and the National Security Industrial Project.

“These young innovators not only delivered high quality of work, they also did so at a fraction of the set cost,” the President said.

Regarding the mapping of our national resources under the National Airborne Geophysical Survey Project, a private firm had quoted to do it at a cost of Sh30 billion, but Uhuru said the team of young professionals programmers will do the job at Sh4 billion.

The two, he said, created an automated weeding robot to help farmers eliminate the need for herbicides or manual weeding in their crops.

The machine uses artificial intelligence to differentiate between weeds and crops.

The innovation has a robotic arm for weeding in-between the crop row and a plough-like weeding tool that is dragged by the robot as it passes in between the rows of crops to remove inter-row weeds.

The President also gave an example of 25-year old Roy Allela, holder of a Bachelor’s degree in Microprocessor Technology and Instrumentation from the University of Nairobi.

The student developed a pair of smart gloves that helped him communicate with his six-year-old deaf niece.

“With the examples of the National Security Programme, weeding robot and the smart glove, it is clear that Kenya has a pool of talented and gifted young people,” the President said.

It was the first time that the President had dedicated most of his speech at a national day fete to highlight the achievements of the youth and rally them to embrace opportunities availed to them.

“In the last crop of Chief Administrative Secretaries I appointed, the vast majority of the appointees were in their 20s and 30s, a continuation of my promise to the youth that my Government will empower them and give them a greater voice,” he said.

His passionate appeal to the youth to be ready to take up new challenges was a precursor to the unveiling of the BBI report, laden with enticements for them as well.

Its proposal to grant fresh university graduates a four-year grace period before starting to repay their loans as well as establishing a youth commission could counter Ruto’s hustler narrative.

The DP’s strategists are said to have been mulling campaigning on the platform of scrapping Helb loans and instead turning them into grants for young people completing university education.

“The Ruto campaign team has a robust approach on how they will transform university funding for all students pursuing undergraduate degrees. They have tried to steal our idea but still they are off the mark,” Kimilli MP Didmus Barasa, a key Ruto ally, said.

According to Barasa, Ruto’s track record as Higher Education minister speaks for itself. He said key among Ruto’s docket at the docket was reducing the waiting period for KCSE graduates to joining universities from two years to less than five months.

The current allocation for Helb stands at around Sh10 billion annually but DP’s allies say this would be doubled if they win in 2022.

Seen as a Uhuru-Raila masterstroke to turn the tables against Ruto’s growing national support among the youth, the BBI team has proposed a seven-year tax holiday for start up firms owned by youth.

According to the report released on Wednesday, the proposal would safeguard the entrepreneurial spirit of youth in the country.

“The Bill seeks to amend the Micro and Small Enterprises Act, 2012 to give youth-owned enterprises a seven-year tax break, and to establish business incubation centres across the country for the purposes of providing business advisory services, which include access to capital and government contracts,” the report reads in part.

The BBI proposals targeting to address the plight of the millions of unemployed is partly seen as political card targeting to counter the DP’s ramped up campaigns against the “dynasties’.

Political analyst Fredrick Nyamboga told the Star that the “dynasties”, have developed cold feet to Ruto’s aggressive campaigns to woo the youth and see that as an incitement against the rich.

“The hustler narrative was gaining momentum across the country and the government had to look for a way to appear to be addressing their issues and we are seeing that in the BBI,” Nyamboga said.

He said millions of unemployed yet ignored youthful population pose a danger to the country’s peace and stability.

Already, Nigeria is witnessing a wave of unrest with millions of unemployed youth taking to the streets in what appears to be a revolution campaign that has seen scores killed.

The Kenyan youth became a key campaign plank in Ruto’s 2022 presidential campaigns after he launched an elaborate economic empowerment programme to give young people assorted equipment.

The DP has argued that millions of unemployed young people can be economically empowered to make a living in the informal sector.

The DP has dished out wheelbarrows, car washing, welding machines, sewing machines, water tanks, salon equipment and even issued some youth groups with motorbikes in a bid to empower them.

He has also bought furniture from youth groups in a bid to promote them.

Drones vs wheelbarrows: UhuRuto battle for the youth Reviewed by samrack on October 23, 2020 .

Share thisFacebookTwitterPinterestEmailWhatsAppPresident Uhuru Kenyatta arrives at the KWS Law Enforcement Academy in Manyani ./PSCU The battle for the youth could be ratcheted up by the BBI campaigns. Drones vs wheelbarrows: UhuRuto battle for the youth The President is relying on the BBI process to turn tables against Ruto’s hustler campaigns. The DP has rmaped up