DP Ruto will never be President of Kenya – Atwoli

DP Ruto will never be President of Kenya – Atwoli

“The DP is not the right leader for Kenya. He hates others,” he said.

Atwoli said Luhyas have a problem with Ruto as an individual and not the Kalenjin community.

He spoke on Saturday during the funeral of Lugari MP Ayub Savula’s daughter, Joanne Chiri, at Manyonyi village. 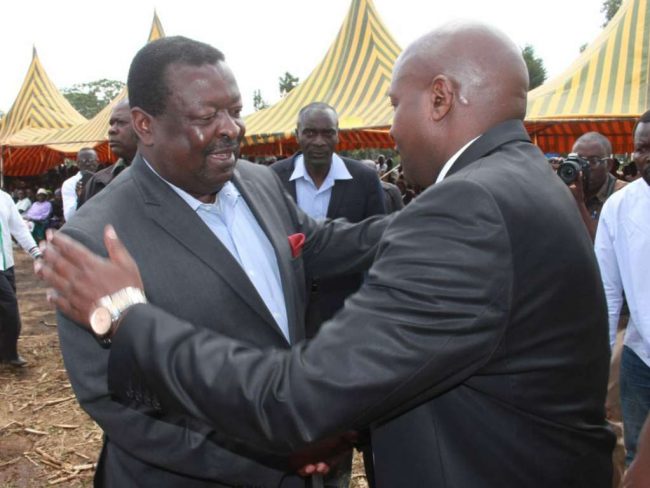 “Ruto will never lead Kenya. We shall have a President in 2022, but it will not be William Ruto,” the Cotu boss said.

Atwoli said he installed ANC leader Musalia Mudavadi as the Luhya spokesman and he does not need another endorsement from anyone.

Mudavadi was made Luhya spokesman by Atwoli at Bukhungu Stadium on December 31, 2016.

Atwoli said he lacks sleep when he sees elected Luhya leaders turning themselves into beggars.

“Luhyas were known to be wrestlers and not being subservient to others because of handouts,” Atwoli said.

“This cheap race for handouts that has emerged within the Luhya community is strange. It is embarrassing.”

Atwoli told Mudavadi to engage other leaders in the region and to rely on President Uhuru Kenyatta to get the Central Kenya bloc.

“We must change the Constitution for the sake of stability of the nation. We’re not relenting on this. We want peace,” he said

Mudavadi said Luhya unity is critical for the community to ascend to power.

He said NASA has already resolved that the Constitution must be amended.

However, he said, the IEBC cannot be trusted to oversee the proposed referendum.

“We cannot have a referee that is cheering the teams in the field,” he said.

Mudavadi told Luhya leaders to have self-esteem. “You cannot be elected by the people and continue begging from others,” he said.

“It’s MPs who approve the budget. Why can’t they push for development through the budget-making process?”

2019 outlook: Kenya to get new Auditor-General, Controller of Budget