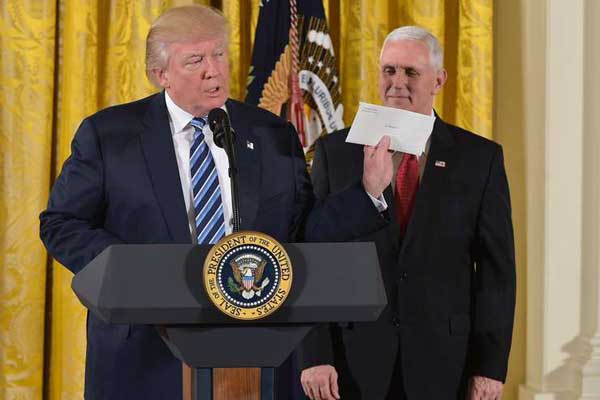 US President Donald Trump holds the letter left for him by former US President Barack Obama, as Vice President Mike Pence watches at the White House on January 22, 2017. AFP PHOTO | MANDEL NGAN

US President Donald Trump made an emotional mention Sunday of a “beautiful letter” that he said Barack Obama had left for him in the White House.

“I just went to the Oval Office and found this beautiful letter from President Obama,” he said at a swearing-in ceremony for several top administration appointees.

“It was really very nice of him to do that and we will cherish that,” he said, holding up a white envelope before tucking it back in his jacket pocket.

“We will keep that. And we won’t even tell the press what’s in that letter,” he added.

It has long been part of American tradition for an outgoing president to leave a letter for his successor on the desk of the Oval Office.

The letter left in 1993 by Republican president George H.W. Bush for Democrat Bill Clinton — the man who deprived him of a second term — was considered particularly elegant.

“Your success now is our country’s success,” it read. “I am rooting hard for you. Good luck.”

Bush warned Clinton that “there will be very tough times, made even more difficult by criticism you may not think is fair.”

But the elder Bush added that even entering the Oval Office on his last day as president, “I felt the same sense of wonder and respect that I felt four years ago.”