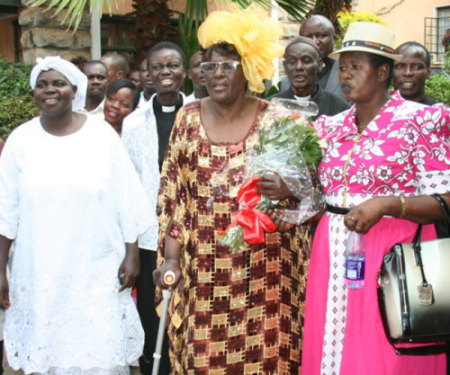 Mama Oliech (center) with church members when she arrived from France

Down the dusty Karandini region, off Naivasha Road in Dagoretti Corner, stands an old and rusty mabati structure, that has seen better days. Outside the ‘café’ a big black frying pan sits on three-stones ready to turn the hundreds of Tilapia fish into a fried delicacy.

From the door emerges ‘Mama Oliech’ (Mary Auma) on crutches, giving instructions to her workers. She is the mother of famous pro football star, Dennis Oliech. Her voice is still commanding, although she has lost her spring due to debilitating liver, ovarian and lymphatric cancer treatment.

The treatment and staying in hospital for a year and more than six months in a rented apartment cost millions of shillings.

“My son Dennis now has no car. People are laughing at him saying he spent all his money treating his mother and that he will remain poor. I believe in God. My children won’t remain poor because they took me for treatment,” she asserts.

In an earlier interview with Lolwe TV Network (LTN), Mama Oliech revealed that she left France with an outstanding hospital bill of over Sh8 million. And that is after Oliech’s club and the footballer himself had already pumped millions more towards her medical expenses.

“I was in the ICU and the doctors told my family to take me back to Kenya, since they thought I wasn’t going to make it. They told my children that it would be cheaper to fly me back to Kenya alive than dead,” she says.

Mama Oliech says that the many months she stayed in hospital only strengthened her resolve to survive.

“I wasn’t going to die, yet my family had given everything for me to get treatment. I had cancer in my liver and ovaries. Then I had lymphoma.”

She says the family wouldn’t have made it in France were it not for the Kenyan Ambassador who was very supportive. “He used to personally visit. At times, I couldn’t even eat the foreign food, but I got a lot of support from the embassy. I am so grateful to them.”

Doctors said it was cheaper to fly me home alive than dead— Mama Oliech reveals her battle with cancer in France Reviewed by samrack on July 10, 2015 .

Mama Oliech (center) with church members when she arrived from France Doctors said it was cheaper to fly me home alive than dead— Mama Oliech reveals her battle with cancer in France Down the dusty Karandini region, off Naivasha Road in Dagoretti Corner, stands an old and rusty mabati structure, that has seen better days.