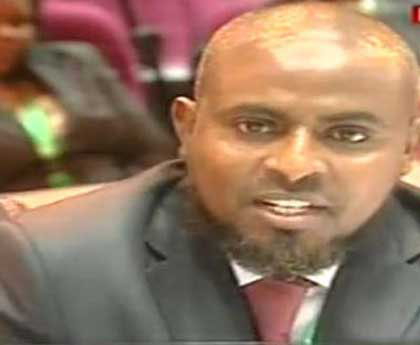 Mohammed Abduba Diba, professional teacher and husband to three, was the stand out candidate during last night’s presidential debate. He came to the debate as the clear underdog, in terms of votes and experience, but came out as probably the highest gainer. Throughout the debate, he answered questions cleverly and was sure to include a light touch. Some of his quotes are still a trending topic among Kenyans.

To honour the good work Dida did in ensuring a lively debate, Kenyans came up with more jokes to add on what Dida had already given us. Below are some of them, plus other general ones concerning the debate.

Dida’s family,they are called the adidas

Can Dida and Mudavadi swap podiums? Dida can now sit at the table of men!

Kalonzo is still deciding which tv channel to watch.

Slow but sure dida is becoming the moderator. Julie watch out

A teacher is like a lactating cow” that explains a lot about most of my high school teachers #KEDebate13Â» #idie woiii!!

Dida: You can have someone with a PhD in electricity, and they will spend the night in the dark

To Save Kiyiapi from being eliminated, SMS ‘PENGO’ to 2282

First rule of presidential debate: Beware of candidates like Dida who have nothing to lose. They can bury you

Dida: Eat when youre hungry

“Today you are still cleaning feet of jiggers and teaching kids to wash hands. All those years, where were you?” DIDA

Linus: How old is your party.. Dida: our ideas are old

If Dida becomes president he will pull a Mututho Law on food lovers.

The closest Dida will get to state house, is by teaching at state house girls

Why r we standing on metalic podiums, what debate are we taking part in

Does Dida want a 4th wife? Asking for a friend.

Abduba Dida can’t seem to trace where he parked his camel.

I hope this ‘Eat when you hungry’ by Dida, hasn’t been misquoted somewhere in Nyeri to ‘Hit when u Angry’

Wolololo ati muite should be made the minister for defence..that face can ever scare away Rambo…hahahahaha

Julie: What colour is an orange? Dida:The sky is up, the trees sway in the wind, I love Bacon,unicorns,the rainbow.How much time do I have?

Now imagine Dida on @XYZShow.. They won’t even need to write the jokes

Before Dida it was a Two Horse Race, Now we have Two Horses and a Unicorn”

Linus asking Dida the wrong question. Dida is waiting for the killer question, “If x=6+4y, Find the mass of the sun?”

Now to the big question, who is dropping Dida home?

Raila’s wife is called Dida. The first D is silent.

On the Second part of the Debate Julie Gichuru Offered Dida the option to call a friend.

Dida,after post election violence, wakenya wengi wali a Ngamia You should have seen Dida’s face when he walked out head high only to find waititu’s graffiti on his camel

Mohammed Abduba Diba, professional teacher and husband to three, was the stand out candidate during last night’s presidential debate. He came to the debate as the clear underdog, in terms of votes and experience, but came out as probably the highest gainer. Throughout the debate, he answered questions cleverly and was sure to include a