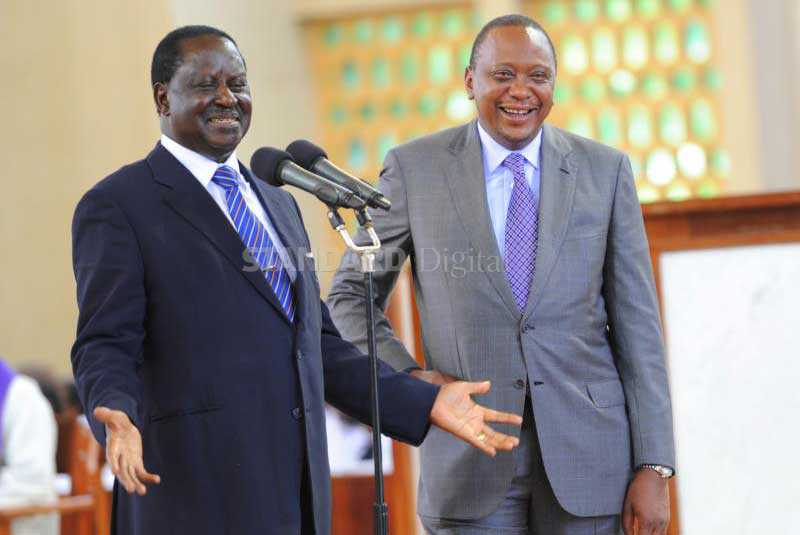 Calls for President Uhuru Kenyatta to hold dialogue with Opposition chief Raila Odinga dominated discussions at a special session to deliberate over the Kenyan political situation at the European Parliament. The majority of members of the EU Parliament asked the two top politicians to demonstrate leadership by engaging in talks aimed at bringing the country together after last year’s highly divisive General Election.

EU says Trump is losing on trade The MPs, who discussed the political situation in Kenya on Tuesday night, warned that if the sharp political divisions between the two leaders and their supporters continued to be unresolved, the country risked sliding into a crisis. Contributing to the debate, Marietje Schaake, who was the chief observer for the European Union Election Observation Mission in Kenya during the August 8 elections and the repeat poll on October 26, said Kenyan leaders should work towards uniting the country. “I call on Kenyan political leaders from both sides to show constructive leadership and rebuild trust. Integrity should be baked into the electoral system, regardless of who is in charge,” argued Ms Schaake. “The independence of institutions such as the Judiciary should clearly be respected by all,” she added during the debate that lasted an hour and five minutes in Strasbourg, France.  The discussion ended at 9:45pm Kenyan time. Bodgon Wenta emphasised that the stalemate could only be resolved by Uhuru and Raila sitting down together at a discussion table. He also said any changes to the electoral laws should be carried out soon. “What is needed now is serious dialogue between the President and all the proponents to avoid further division. All the leaders must work together so that there is no repeat of post-election violence. President Kenyatta should be open to working with the Opposition,” said Mr Wenta. Global attention ALSO READ: Why county governments should adopt Uhuru’s Big Four Charles Tannock challenged Uhuru to lead the way in reconciling with his opponents, observing that as the Head of State, global attention would be on him. He insisted that as president, Uhuru would be held responsible if the country descended into civil war. “The weight of responsibility now clearly lies on the shoulders of the Jubilee Party and President Kenyatta. The world will be watching closely. Kenya must now come together again to uphold the rule of law and fundamental freedoms that are indispensable to a flourishing, democratic nation,” noted Mr Tannock. Yesterday, sharp divisions emerged between Jubilee and National Super Alliance (NASA) leaders over the debate on Kenya at the European Parliament, with National Assembly Leader of Majority Aden Duale and his minority counterpart John Mbadi reading from different scripts. Mr Duale told The Standard that Kenya was an independent country and MPs in a foreign country could not purport to lecture the President, who he said was validly elected, on what he was expected to do. “Kenya is not a colony of the European Union and there is no way we can implement a resolution made by a foreign country. Whatever they said can only be for public consumption but never binding to our country,” said Mr Duale. The Garissa Township MP said the EU Election Observation Mission was just like any other observation group and should not overstep its mandate concerning the country’s electoral process.

“The EU observation mission must be reminded that it was just like any other mission group, like African Union and the others, and it should not start dictating to Kenya,” he said. Mr Mbadi was however more reconciliatory. Mbadi explained that the Opposition had made its stand known concerning the calls for dialogue, stating that they would be ready for talks once the ruling coalition was ready for engagement. “We have discussed this matter on several occasions and our position is known by everybody. If Uhuru is ready for talks, let him tell us and we will sit down and engage him,” said the Suba South MP. Senate Speaker Kenneth Lusaka, Pokot South MP David Pkosing, Kenyan-born Australian Senator Lucy Gichuhi and Amani National Congress Nominated MP Godfrey Osotsi also weighed in on the matter. Mr Lusaka said before any dialogue was held, the Opposition leader must first recognise that the President was rightly in office. Mr Pkosing faulted the NASA boss’s approach to dialogue, adding that the Kenyan Parliament should be left to discuss the country’s future since it had representatives from both sides. Ms Gichuhi challenged Kenyan leaders to look for home-grown solutions to their problems instead of depending on the West to show them the way. Accept outcome

“The problem currently in Kenya can be solved politically by the Kenya leaders themselves. As leaders, we should also learn to accept the outcome of elections. Ordinary Kenyans pay a steep price when politicians refuse to accept defeat,” she said. Mr Osotsi said the coalition was focused on the planned swearing-in and thus can only engage Jubilee once Raila is installed. “The focus now is on the planned swearing in of Raila. We want to swear him in so that when they engage in a talk, it would be between two presidents,” said Osotsi.