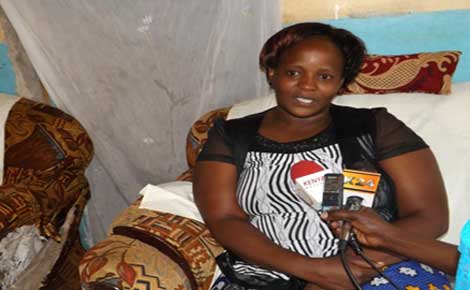 Share this story: In Lebanon, a Kenyan maid has bleach poured over her head as punishment for cleaning the bathroom too slowly by an employer who threatens to send her home in a box.In Saudi Arabia, another domestic worker from Kenya is given a grim choice: sex with the boss or death. “I felt like I was a prostitute,” she recalled. “I used to obey because I wanted to come back to my country safely.” Lured by the promise of well-paid work and a chance to escape joblessness at home, hundreds of thousands of Kenyans are thought to be employed in the Middle East, sending much-needed remittances to their families every year. But reports of abuse prompted Kenya last September to ban its citizens from seeking domestic work in the Middle East and to revoke the licences of 930 recruitment agencies. Neighbouring Ethiopia and Uganda have also banned their workers from going overseas in a bid to end exploitation. Read more

When Mary Wanjiku boarded a Saudi Arabia-bound plane at the Jomo Kenyatta International Airport (JKIA) one afternoon, she was hopeful that working abroad would enable her take care of her two sons and five siblings.

But Wanjiku, 37, would get the shock of her life upon landing in the Arabian Kingdom. It was not long before she would regret leaving her homeland that sunny Sunday afternoon in January to what she thought was the promised land. Her misery begun immediately she reported to work. Her employer cut her salary by half from the Sh30,000 a month they had  signed up with the recruitment agent before she left Kenya.  She was also overworked, assaulted, mistreated and denied food.

“I cannot put into words how badly I was treated in Saudi Arabia. I was forced to take a bath while my employer and her daughters watched as they believe Africans do not know how to bathe. I was only allowed a to sleep for two hours every day and I had to sleep with the chickens and rabbits,” Wanjiku says.

When Wanjiku could not take it any more, she ran  away to the nearest police station thinking that law enforcers would help her.

But her refuge at the police station would not last long: her boss found out where she was and demanded that she be charged with absconding duty. “My employer told me she had paid Sh200,000 to the agent who recruited me, and that she would not let me waste her money,” she said. Wanjiku was then thrown to a prison called Tahrir.

In the police station, she met hundreds of  African women from Kenya, Ethiopia and Nigeria.

Speaking at her home in Murera, Juja, an emotional Wanjiku narrated to The Standard on Sunday how she thought of committing suicide to end her misery. But before she could do that, she overheard Ethiopian inmates telling their Nigerian counterparts that it was a taboo for Arabian men to see a naked woman.

With this information, Wanjiku hatched a plan she hoped would end her misery and get her back home to Kenya. “I decided to pretend to be insane,” she said. But her Kenyan friends discouraged her, saying the plan would not work and could land her into more trouble.

She decided to give it a try anyway. Wanjiku says she stripped naked one lunch hour and ran out to an area of the prison where men were stationed. Dismayed, the male warders ran away to avoid seeing the naked woman, forcing prison authorities to call for help from women police officers in a nearby police station.

The prison boss then ordered that she be examined in a psychiatrist hospital, where she was found to be of sound mind. “I told the prison and police authorities that I was not mentally ill and all I wanted was to be allowed to go back home,” she said.

Wanjiku told the authorities that she would not put on her clothes until she got her passport back from her employer.

Left with no choice, the authorities gave in to her demands. “My employer was ordered to surrender my passport. I was also handed my airline ticket and asked to leave Saudi Arabia the same day at 11 pm,” she says.

Her sister Margaret Wanjiru regrets Wanjiku’s ordeal.  “We tried to persuade her from going as we had heard stories of Kenyans being mistreated and killed in that country, but she could hear none of it. Left with no choice, we wished her well,” said Wanjiru.

Wanjiku is only the latest victim to go public about her plight in Saudi Arabia, where hundreds of Kenyan women are suffering at the hands of cruel employers.

Last month, Jane Wangari pleaded with the Ministry of Foreign Affairs to help secure the release of her daughter Virginia Wanja who is being held in a Saudi Arabia jail. Wangari said her daughter was charged with absconding duty after she ran away from her employer who was mistreating and overworking her.

“She told me she was required to work in three different households daily without pay or food. She was only allowed two hours of sleep daily,” her mother Wangari said.

Mary Nzili, another victim of abuse by her employer, returned home from Saudi Arabia last month after a stint at the Tahrir jail. Nzili said domestic workers in the Modlle Eastern country are mistreated and overworked with little or no pay.

“There are many Kenyan women being mistreated and going through a hard time in Saudi Arabia. I left 13 Kenyan women in the prison. The government should step in and rescue them,” Nzili said.

Earlier in the year, 30-year-old Kadzo Karisa was said to be stranded in Lebanon. Kadzo was seeking Government assistance to travel back to Kenya after she differed with her Lebanese employer.

Last month, the Government suspended the recruitment of Kenyans for work in the Middle East.
Citing numerous cases of mistreatment, the Labour Ministry also suspended the operations of 930 recruitment agencies in the country. Cabinet Secretary Kazungu Kambi, while announcing the freeze, said most of the agencies mislead job seekers.

Last Tuesday, Kambi appointed an 11-member task force to advise the Government on vetting and licensing of agencies recruiting Kenyans for work abroad. The task force has three months to complete its work.

Reports indicate that about 20,000 Kenyans are currently employed as domestic workers in the Middle East.

Desperate Kenyan maids abused in Middle East despite ban By Reuters Share this story: In Lebanon, a Kenyan maid has bleach poured over her head as punishment for cleaning the bathroom too slowly by an employer who threatens to send her home in a box.In Saudi Arabia, another domestic worker from Kenya is given a