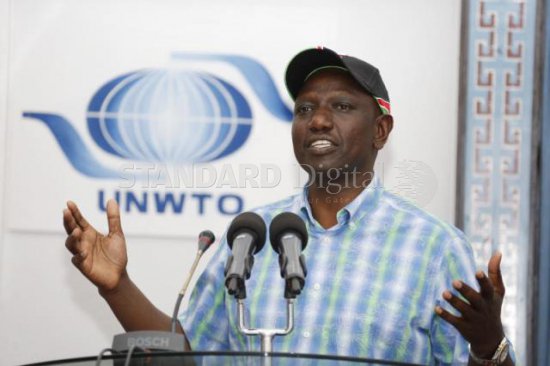 Kenya may have been fooled into supporting amendment of an ICC rule, which has now returned to haunt Deputy President William Ruto in his crimes against humanity case.

Placed at the centre of this “play” are top ICC officials — including a judge — whom Kenyan officials say impressed on them to support the amendment of Rule 68 of the Rule of Procedure by undertaking it would not be applied in the Kenyan cases. The revelations are partly mentioned in a historic judgment delivered on Wednesday admitting original and recorded evidence of prosecution witnesses who have either recanted or disappeared altogether. The “prior recorded testimonies” were admitted under the rule which was amended by the Assembly of State Parties on November 27, 2013 to increase scope under which prior recorded evidence can be admitted. Time limitations Ruto’s defence had argued that Kenya had received undertaking that an amended Rule 68 will not be applied retrospectively, and more specifically, would not apply in the Kenyan cases. See also: I am now ready to face ICC judges, says former journalist Walter Barasa The Prosecution, on the other hand, argued they were not aware of any undertakings provided. In their judgment on Wednesday allowing use of the new rule, the judges exposed critical variance between what Ruto’s defence says was intended by the ASP amendment and what was eventually changed. “The Chamber notes that the text of the amended Rule 68 does not contain any express time limitation as to when it would apply. The ASP is capable of imposing such a limit, and has done so in other contexts.” “The resolution adopting the amended Rule 68 also does not contain a time limitation, although, as a preamble to the amendment of the Rule, it could be a source of interpretation,” the judges said in their ruling which bought off all prosecution arguments. The Government and lawyers in the Kenyan cases initially opposed the amendment. Their argument is that it was fashioned to rescue fledgling cases. However, during the ASP, Kenya, riding on the success of forcing through a separate amendment which essentially enabled trial of Ruto and President Uhuru Kenyatta in their absence, beat an about-turn on the amendment. At the time, Foreign Affairs Cabinet Secretary Amina Mohamed emerged from the ASP meeting elated. She announced Kenya had managed to “force concession” and “secure agreement” that the rule would not work retroactively. The agreement, sources embedded in the Kenyan delegation which negotiated the treaty say, was offered by a senior sitting ICC judge who chaired the Working Group on Lessons Learned, the group which championed the process.

Share this story: “A top sitting judge of the court gave a specific and unconditional undertaking to our delegation that this rule will not be applied in our cases,” a senior government officer told The Standard on Sunday yesterday.Ruto’s defence relied on this agreement as well as ASP emphasis on the principle of non-retroactivity to argue the rule was not applicable. “The OTP’s proposed reliance on the rule is contrary to representations made and assurances given to the delegates during the negotiations” on the amendments to the rule that it would not apply to cases arising out of the Kenya Situation,” Ruto’s lawyer Karim Khan argued. Good faith Khan said the rules are “first and foremost” a reflection of the will of the ASP, not judges. He argued that “senior officials of the court” made representations at the ASP on the application of the rule which satisfied states such as Kenya. Khan said it was clear from commentators and reports made at the time that Kenya objected to the proposed amendments and certain concessions had to be made to address its concerns. See also: I am now ready to face ICC judges, says former journalist Walter Barasa “These representations cannot be dismissed as irrelevant when determining whether the amended rule can be applied contrary to those express representations,” he said. Khan said the agreement enabled the amendment to be passed by consensus and cited concerns by the African Union Commission opposing prosecution’s intention to rely upon Rule 68 in the case. He also quoted a statement made by Ms Mohamed shortly after the ASP ended in which she said: “We argued and forced changes that reassure that the new rules will not apply to the Kenyan cases.” Khan also quoted Article 31(1) of the Vienna Convention on the Law of Treaties which says that a treaty shall be interpreted in good faith: “Kenya acted in good faith and joined other State Parties in agreeing the amendment by consensus, in light of understandings that the rule would not apply retroactively and, in any event, to this case.” None of these arguments could impress the judges. When they made their ruling on Thursday, they made it clear that the only conclusion they could draw from the ASP resolution’s language is that the amended rule can actually happen in the Ruto case. They said the only way it may not be applied is if it contravened Article 51(4) of the statute which bars retroactive application of amendments to the detriment of the accused.

“The Chamber does not consider the relief sought to be a retroactive application of the amended Rule 68. The Prosecution’s request is not seeking to alter anything which the defence has previously been granted or been entitled to as a matter of right. “This is not a situation where, for example, the Prosecution attempts to apply an amended admissibility provision to exclude evidence previously admitted into the record. Here, the Prosecution is seeking to apply the provision prospectively to introduce items into evidence for the truth of their contents,” the judges said. They said even if the relief sought was considered to be a retroactive application of the amended rule, chamber did not consider that this was being applied “to the detriment of the accused.” They said it cannot be said to be detrimental to Ruto simply because it allows the prosecution to request the admission of incriminatory evidence against him. “The amended Rule 68 is a rule of neutral application – it is an admissibility rule that can be equally taken advantage of by all parties to the proceedings before the Court. Its application is not inherently detrimental to the accused,” they said. The judges locked out Kenya from the proceedings on this matter. They said they could not privilege a single member of the ASP views over the collective will of the ASP reflected in the resolutions amending the rule.