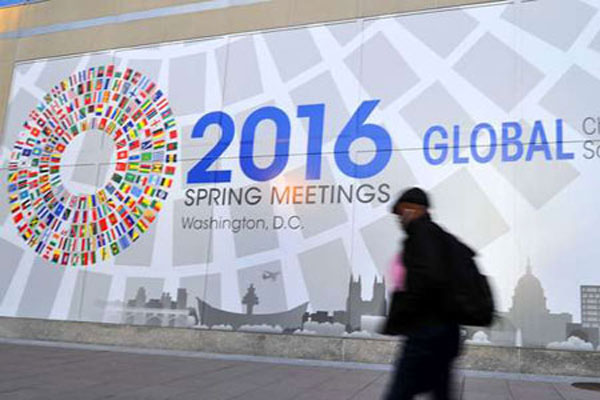 People walk past a mural advertising the World Bank-IMF 2016 Spring Meetings April 5, 2016 in Washington, DC. Thousands of government officials, journalists, civil society organizations, and participants from the academia and private sectors, gather in Washington DC for the Spring Meetings of the International Monetary Fund and the World Bank Group. PHOTO | KAREN BLEIER |  AFP

Worries that the global economy is nearing a stall made worse by the spectre of ‘”Brexit” cloud the air as the world’s finance chiefs gather in Washington beginning Thursday for the IMF-World Bank Spring meetings.

Finance ministers and central bankers will be greeted with dire warnings that if they do not take immediate action to boost growth and consumption, the world risks slowing to the point that recession is possible.

The IMF opened the week by cutting its forecast for world economic growth for the third time in six months, saying growth has been “too slow for too long.”

It said intensifying financial and political risks around the world, from volatile financial markets to the Syria conflict to global warming, had left the economy “increasingly fragile.”

And it said it was concerned over rising nationalism and “fraying” unity in the European Union under pressure from the migration crisis and the possibility Britain might pull out of the European Union — Brexit. Britain votes on whether to remain in the 28-nation EU on June 23.

The Fund lowered its growth forecast for 2016 to 3.2 percent, compared to the 3.8 per cent it expected a year ago.

“The weaker is growth, the greater the chance that the preceding risks, if some materialize, pull the world economy below stalling speed.”

The meetings open amid a rise in countries seeking aid from the IMF and the World Bank.

Last week Angola, its finances battered by the plunge in oil prices, requested a three-year bailout program from the Fund.

And the World Bank said Monday that its lending to needy countries surged last year “to levels never seen outside a financial crisis.”

In meetings with the 189 country members of both institutions, and in parallel meetings of the G20 leading economies, the message will be that each country needs to try harder to reverse the downturn.

Those with stronger finances need to spend and invest, in infrastructure for example; others need to restructure and reform in ways that boost economic activity.

But also in the air is a need for a Plan B if growth and confidence further deteriorate, especially as doubts rise about the efficacy of the low and negative interest rates of leading central banks.

Looking for Plan B?

Going into the meetings however there were few signs of a collective effort likely to emerge.

The Germans — who are pushed to do more spending — want to see more reforms by others. But, said one person closely familiar with German officials’ thinking, structural reform “is like the Yeti: many people say they have seen it, but we really don’t even know if it exists.”

Meanwhile the United States, the world’s largest and, among developed countries, the healthiest economy, wants to see others doing the heavy lifting.

“The United States cannot and must not be the only engine of growth,” a senior treasury official said this week.
Underpinning the talk of policy and macroeconomics, however, is the issue of confidence among people around the world not seeing conditions for themselves improve after years.

With unemployment already high in many regions like Europe and rising in emerging and poorer countries, he added, “We definitely face the risk of going into doldrums that could be politically perilous.”

Political challenges are already stirring the pot, from the crisis in Brazil, South America’s recession-bound largest economy, to the conflicts in the Middle East, to Europe’s nationalist reaction to migration crises and terrorism.

The IMF said that the threat of Brexit “could do severe regional and global damage by disrupting established trading relationships.”

The meetings could also turn their focus to one source for feelings that economies are only serving elites: the “Panama Papers” trove of leaked documents showing how the wealthy and powerful set up and funnel money through anonymous companies in tax havens.

Vitor Gaspar, who heads the public finances department at the IMF, called “simply unacceptable” the perception that the well-off are not paying their fair share, when “in many places around the world people are asked to contribute more to public finances.”

Share thisFacebookTwitterPinterestEmailWhatsAppPeople walk past a mural advertising the World Bank-IMF 2016 Spring Meetings April 5, 2016 in Washington, DC. Thousands of government officials, journalists, civil society organizations, and participants from the academia and private sectors, gather in Washington DC for the Spring Meetings of the International Monetary Fund and the World Bank Group. PHOTO |