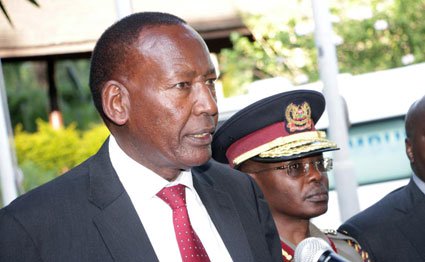 The CS died at Karen Hospital, a few hours after he was admitted for check-up.

Chief of Staff and Head of the Public Service Joseph Kinyua confirmed the news in a statement early on Saturday.

“The country to be updated as more information becomes available,” Mr Kinyua said.

Sources close to Mr Nkaissery said he went to Karen Hospital at around 3pm after leaving Uhuru Park where he accompanied President Uhuru Kenyatta at a prayer event.

“He actually looked okay but he said he needed to go to hospital as he was not feeling well,” the source said

His body has been moved to Lee Funeral Home.

President Kenyatta picked Mr Nkaissery from the opposition to head the Ministry of Interior and Coordination of National Government on December 2, 2014, to replace Joseph Ole Lenku.

Before that, he was the member of parliament for Kajiado Central constituency on an Orange Democratic Movement (ODM) ticket.