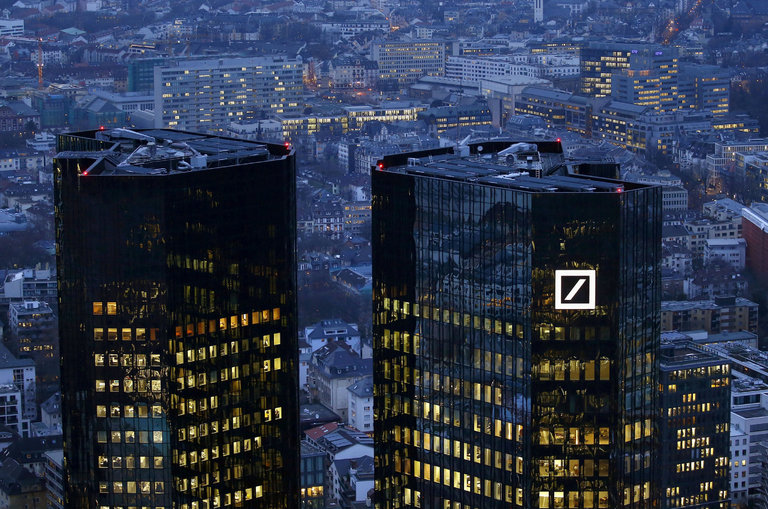 Deutsche Bank headquarters in Frankfurt. For the year, the bank’s shares are down 53 percent.CreditKai Pfaffenbach/Reuters

Stock markets were rattled on Thursday after reports emerged that some clients of Deutsche Bank, the struggling German lender, were reducing their exposure.

Its shares in the United States tumbled 6.7 percent for the day, after falling as much as 9 percent, in unusually heavy trading. The afternoon slide helped pull down financial stocks and the broader market.

For the year, shares of Deutsche Bank are down 53 percent, battered by worries that it has too little cash relative to its 1.8 trillion euro ($2.02 trillion) balance sheet, which has a larger share of complex, hard-to-sell securities than its peers.

Over the last year, investors have expressed their negative view of the bank by shorting its stock, or betting that the share price will fall sharply.

As the shares have hit historical lows, and with continued uncertainty over whether the German government has plans to step in, some investors are having second thoughts about using Deutsche Bank as a counterparty.

One long-term client, who would not reveal his identity because he did not want to jeopardize his relationship with Deutsche Bank, said on Wednesdaythat he was no longer using it to trade complex securities, which require a trading partner that is large and has ready access to pools of liquidity.

On Thursday, after the trading day had ended in Frankfurt, Bloomberg reported that 10 hedge funds had removed some of their cash reserves from the bank.

But Barry Bausano, who oversees Deutsche Bank’s hedge fund relationships, noted that the firm’s prime brokerage business has about 800 hedge fund clients, a number that fluctuates week to week. Mr. Bausano also pointed out that the environment for hedge funds has been challenging recently, as they struggle with poor performance and redemption pressures.

“We have ebbs and flows in this business every week,” he said.

Many Deutsche Bank clients, in fact, say that they have no problems with using the bank to buy and sell liquid securities like stocks.

They say they are comfortable using Deutsche Bank for such trades because they are certain the German government would never let it fail.

For providing all manner of lending and trading services to hedge funds and other investors, Deutsche Bank is one of the elite practitioners on the street, with large trading hubs in London and New York.READ MORE

Deutsche Bank headquarters in Frankfurt. For the year, the bank’s shares are down 53 percent.CreditKai Pfaffenbach/Reuters Concern Over Deutsche Bank’s Health Shakes Markets Stock markets were rattled on Thursday after reports emerged that some clients of Deutsche Bank, the struggling German lender, were reducing their exposure. Its shares in the United States tumbled 6.7 percent for