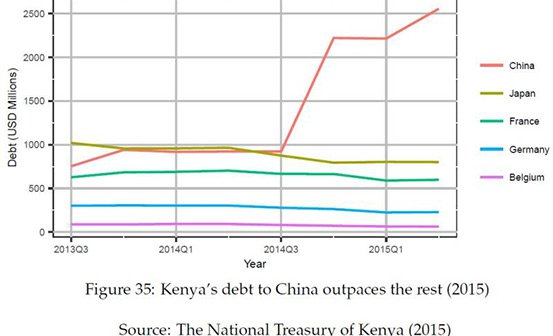 The World Bank has warned that Kenya’s level of borrowing from China could be close to unsustainable.

he caution from the US-based international lender that provides loans to developing countries, is contained in a policy paper on Kenya. “Kenya still has a heavy debt burden and China’s loans can bring debt to unsustainable levels,” the Bretton Woods Institution says of the country’s appetite for loans from the Asian economic giant. The fears of the loans harming Kenya in the longer term are compounded by the fact that China does not tie aid or loans to governance, the paper says. “The loans, however, could harm Kenya in the long-run because of their lack of transparency and failure to tie aid to key governance reforms.” Some of China’s loans are non-concessional, meaning they are granted at market rates, which can raise debt to GDP levels quickly – Apurva Sanghi, the author of the study warns. “China’s aid to Kenya is almost entirely loans,” added Sanghi, who is WB’s lead economist for Kenya, Rwanda, Uganda, and Eritrea, in one of the fiercest criticism of the World’s second largest economy.

READ MORE Why Kenya is losing Ugandan and Tanzanian export markets to China Graft scaring away investors, World Bank warns Cabinet approves second phase of Standard Gauge Railway project While the Western countries have billions worth of outstanding loans given to Kenya, some like the US and UK are running several programmes in health and education sectors that qualify as grants. Aid programmes are often run by organisations from the respective donor countries, often due to lack of transparency and accountability when the funds are channeled through the government. Among the loans granted in the recent period is the project financing for the Standard Gauge Railway, estimated at 90 per cent of the total cost worth Sh327 billion. China has already signed up the funding to the second part of the railway project to Naivasha, and is almost certain to finance the rest of the line to Kisumu and Malaba border point. China is the country’s single largest lender, holding more than half of the total external debt – which is already more than Sh3 trillion, according to official data.
Read more at: http://www.standardmedia.co.ke/business/article/2000196219/chinese-loans-pushing-kenya-s-debt-to-unsustainable-levels-world-bank-warns

Share thisFacebookTwitterPinterestEmailWhatsAppThe World Bank has warned that Kenya’s level of borrowing from China could be close to unsustainable. Chinese loans pushing Kenya’s debt to unsustainable levels, World Bank warns he caution from the US-based international lender that provides loans to developing countries, is contained in a policy paper on Kenya. “Kenya still has a heavy