Chebukati Three want to be paid Sh220 million to resign 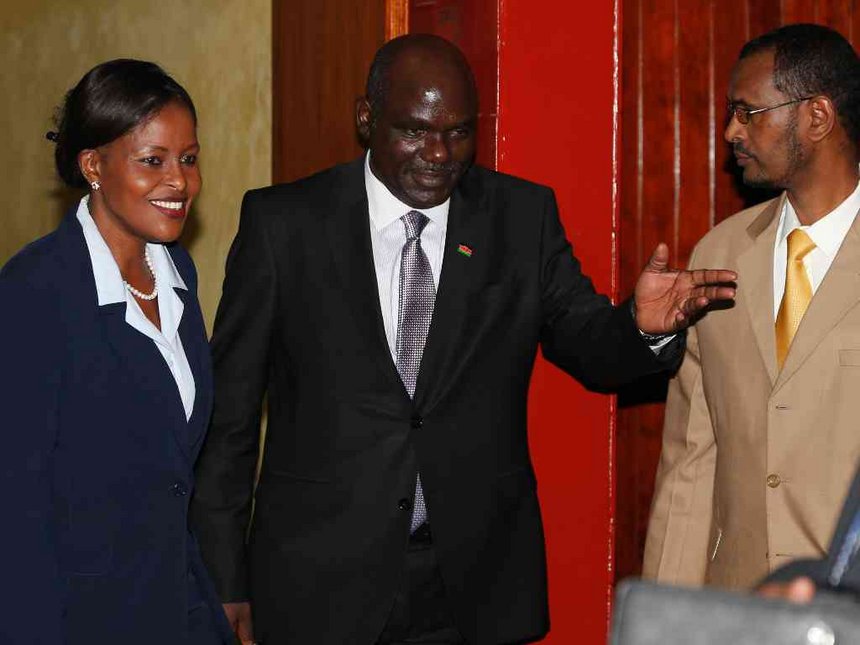 Chebukati Three want to be paid Sh220 million to resign

Chairman Wafula Chebukati and two remaining commissioners of the Independent Electoral and Boundaries Commission want to be paid for the balance of their terms if they are to leave office.

One of the commissioners told the Star in confidence yesterday that although four of their colleagues had resigned, they will only leave office through a negotiated package.

“We have done nothing wrong and we are determined to go on with work, but if anyone wants us out, then we will ask to be paid for the remaining part of our terms.

On Monday, vice-chair Consolata Maina led fellow commissioners Margaret  Wanjala and Paul Kurgat to throw in the towel as divisions at the electoral body boiled over.

The other half, comprising Chairman Chebukati and commissioners Abdi Guliye and Boya Molu, were left holding on.

The commissioners have served for 14 months since their appointment in January 2017, eight months to the last elections. They have 58 months — four years and eight months — left of their fixed six-year term to go.

If the government bows to their demands, it  will cost the taxpayer over Sh220 million to send the three home.

The chairman earns Sh1.4 million per month in salary and other allowances.  He will take home Sh81.2 million, exclusive of gratuity and other benefits.

With a monthly salary of Sh1.2 million, commissioners Molu and Guliye will each pocket Sh69.6 million besides other terminal emoluments.

The three who quit on Monday — as well as Roseyln Akombe in October —  would not be compensated since their resignation was “with immediate effect”. They would only be entitled to their gratuity.

But it will be a tall order for Chebukati to emulate his predecessor Issack Hassan’s team, which negotiated its way out under siege from the Opposition in 2016, with a walk home package of Sh1.8 billion in compensation.

Unlike the Hassan team which, though divided internally stood together till the end, the Chebukati one gave itself away when its feuds broke into open. The exit of the three on Monday, which inside sources say had the nod of political forces, have spelt doom for the Chebukati 3.

Yesterday, National Assembly Majority leader Aden Duale wrote to the legal affairs committee to commence the process of removing Chebukati and his team.

“Parliament will take a lead in resolving this crisis and we will look for the best way out, including a negotiated exit for the remaining three,” Duale said.

The three suffered a blow yesterday after police officers attached to them were withdrawn.

Communications manager Andrew Limo said in a statement late Tuesday evening that the commission had written to Inspector General of Police Joseph Boinnet but had received no explanation.

Confidential sources said Chebukati and his colleagues have decided to stay on and were planning to write to President Uhuru Kenyatta to request him to start the process of replacing their colleagues.

“They are saying that quitting will amount to irresponsibility. In fact, they say what has happened is a blessing in disguise because the country will now have a chance to appoint new commissioners whose terms will end at a different time, thereby ensuring there is continuity at the commission all the time,” said a senior official at IEBC.

Makueni Senator Mutula Kilonzo Junior said the crisis at IEBC needed urgent resolution because the country has been thrust into a Catch 22 situation.

“IEBC is in a mess. The court rejected amendments to reduce quorum from five to three. The CEO is on forced leave and the selection panel in the Act was to cater for the current Commissioners only. If Chebukati and company resign, we will be in crisis and if they don’t, we are in crisis,” said Mutula.

Meanwhile the National Assembly’s Justice and Legal Affairs committee has began exploring ways of reconstituting the commission to ensure its operations are not crippled.

Chairman William Cheptumo (Baringo North) yesterday confirmed to the Star they will meet Chebukati and the other commissioners today.

“We have met and agreed that the meeting we had planned earlier for Wednesday will proceed. We want to show leadership as a committee and we expect the commissioners will come. We had sent them invitation letters,” Cheptumo said.

Chebukati and his team are expected to explain to MPs the challenges facing the commission and proposals for reconstitution.

Cheptumo pointed out that Chebukati and two commissioners remaining at IEBC cannot transact any business due to lack of quorum and hence the vacuum needs to be fixed without delay.

“It is now time for them to leave like the rest have done,” he said.

The committee is exploring ways of creating a long-lasting mechanism of recruiting the chairperson and commissioners because the bipartisan panel that appointed the current commissioners was dissolved after discharging its mandate.

There is no framework in place to fill the vacancies of chairman or commissioners. Cheptumo said the committee is also considering reducing the number of commissioners from the current seven to a minimum of three. He defended the proposals on grounds they will address similar problems in future.

Kiambu Town MP Jude Njomo has published a Bill with proposals similar to the committee’s, seeking to amend the First Schedule of the IEBC Act that requires the President, with approval of the National Assembly, to appoint a selection panel consisting of 11 persons.

The schedule selection panel is supposed to be appointed at least six months before the lapse of the term of the chairperson or member of the commission.

The law does not anticipate the current situation — or filling a vacancy — and only prescribes the procedure for constituting a new commission.

Duale yesterday acknowledged the loophole and called for a negotiated exit for the remaining three Commissioners to pave way for reconstitution of a new team.

The remaining Commissioners can only be removed through a negotiated exit or a petition to Parliament to constitute a tribunal which would recommend their removal on grounds of incompetence or violation of the Constitution.

Murkomen vowed that Jubilee will push for the formation of a tribunal should the Chebukati 3 stay on beyond seven days.

But according to Duale, that route is cumbersome and might hold the country at ransom for long.

In an indication he was not going to be pushed out easily despite the mounting pressure, on Monday evening, a defiant Chebukati said Parliament should move with speed to enact necessary legislation to pave way for the replacement of the four Commissioners.

“Despite the occurrence, the Commission assures the public that its operations are on course and we remain focused on delivering on our constitutional mandate,” he said.

“As such, we are requesting the relevant government organs to act appropriately to ensure that the Commission’s operations are not stifled.”

The crisis at the electoral body comes at a time when the country is poised to undergo  crucial processes — the population census, boundaries review and tens of by-elections from the last general elections.

The Commission is also expected to produce an audit report of that election, which is a constitutional requirement.

All these require the stewardship of a fully constituted commission to implement.

Chebukati Three want to be paid Sh220 million to resign Reviewed by samrack on April 18, 2018 .