Center for African Studies mourns the passing of Calestous Juma 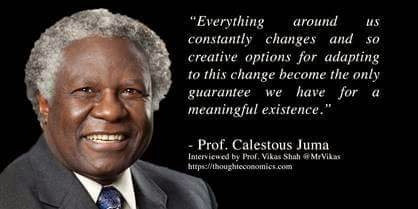 Center for African Studies mourns the passing of Calestous Juma

HKS Dean Elmendorf wrote,
“I am traveling in India now but want to add my own profound sense of sadness about our loss of Calestous.  … I came to rely on Calestous’ invincible good spirits in all of our conversations about his own work and about the Kennedy School’s work regarding Africa.  … For all of Calestous’s amazing accomplishments and contributions to the Kennedy School and to the world, he was always modest about what he had done and focused entirely on what he could do next.  He was a true model for us all to aspire to.  I will miss him very much, as I know so many of us will.
Douglas W. Elmendorf and Harvard’s Center for African Studies shared this message:
Center for African Studies mourns the passing of Calestous Juma
Our dear friend, treasured colleague, and Executive Committee member Calestous Juma passed away on Friday December 15, 2017. He had been undergoing cancer treatment for more than two years. Calestous was born on June 9, 1953, in Kenya. He worked as an elementary school teacher before becoming Africa’s first science and environment journalist at Kenya’s Daily Nation newspaper. He received an MSc in Science, Technology and Industrialization and a DPhil in Science and Technology Policy from the Science Policy Research Unit at the University of Sussex.
In 1988, Professor Juma founded the African Centre for Technology Studies, Africa’s first independent policy research institution designed to advance research on technology in development. In 1989 ACTS released a groundbreaking study called “Innovation and Sovereignty” that led to the adoption of the Industrial Property Act in Kenya and the creation of the Kenya Industrial Property Office. Over the course of his career, Juma was elected to the Royal Society of London, the US National Academy of Sciences, The World Academy of Sciences (TWAS), the UK Royal Academy of Engineering, the African Academy of Sciences and the New York Academy of Sciences.
At Harvard, Calestous was Professor of the Practice of International Development and Director of the Science, Technology, and Globalization Project at the Belfer Center for Science and International Affairs. He also directed the Center’s Agricultural Innovation Policy in Africa Project and Health Innovation Policy in Africa projects funded by the Bill and Melinda Gates Foundation. He served as Faculty Chair of the Edward S. Mason Fellows Program as well as the “Innovation for Economic Development” and “Technology, Innovation and Entrepreneurship in Africa” executive programs. A prolific writer, his new book, Innovation and Its Enemies: Why People Resist New Technologies, was published by Oxford University Press in 2016.
Calestous was an active member of the Center for African Studies’ Executive Committee and Steering Committee and participated regularly in conferences, Town Hall meetings, and various intellectual initiatives. We will feel his absence keenly and send deepest condolences to his wife and son.
Center for African Studies mourns the passing of Calestous Juma Reviewed by samrack on December 15, 2017 .

Share thisFacebookTwitterPinterestEmailWhatsAppCenter for African Studies mourns the passing of Calestous Juma HKS Dean Elmendorf wrote,  “I am traveling in India now but want to add my own profound sense of sadness about our loss of Calestous.  … I came to rely on Calestous’ invincible good spirits in all of our conversations about his own work