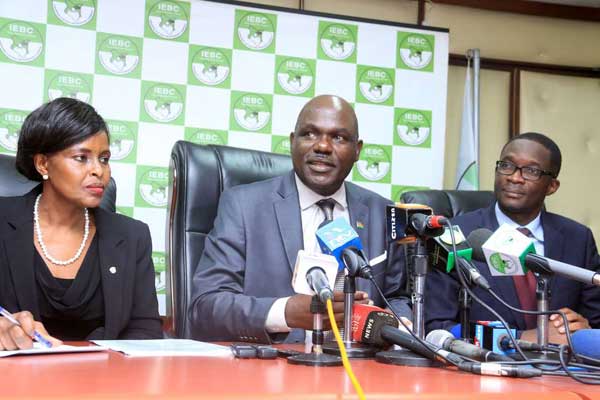 The election monitoring body established by former US President Jimmy Carter has praised Kenya’s “strengthening democratic culture” while at the same time warning of the threat of violence in a pre-election report released on Thursday.

The Carter Centre offers a mixed but generally positive assessment of the work of the Independent Electoral and Boundaries Commission (IEBC).

“The judiciary has also played a key role in contributing to a democratic and competitive electoral process,” the Centre says.

“At the same time the Centre maintains genuine concerns about the level of violence that has prevailed throughout the pre-election period.

“Incidents of violence, incitement and the harassment of candidates and their supporters are unacceptable infringements of democratic norms,” the nine-page report adds.

The prospect of violence during and after the August 8 elections is said to be elevated as a result of the conduct of the political parties’ primaries, which the Centre describes as “chaotic” and “shambolic.”

The report cites “widespread fears” that next month’s voting will also be marred by violence, especially in races for governor and county assembly.

In addition to the large numbers of candidates and the intensity of many campaigns, the looming threat of election-related violence can be seen as a product of “underlying socioeconomic and political tensions arising from land injustices, marginalisation, and disenfranchisement,” the report states.

The Centre adds, however, that it is “encouraged” by the calls for an end to political intolerance made by both President Kenyatta and his main challenger, Raila Odinga.

In its review of the IEBC’s performance in the run-up to the elections, the Carter Centre makes note of the many court challenges and compressed time frame that have complicated the commission’s tasks.

Despite these difficulties, the report finds that “the IEBC has still met most of the legal deadlines and has moved forward with preparations for the election.”

“The Carter Centre commends the IEBC for its efforts.”

“Unfortunately some of the candidates have used the court challenges to criticise its authority and competence in an attempt to delegitimise the IEBC,” the report adds.

But the commission is itself partly responsible for negative public perceptions of its work, the Centre points out.

Commissioners are faulted in the report for “inadequate communication with stakeholders and insufficient transparency regarding their decision-making.”

“This lack of transparency has negatively affected the confidence and trust of the electorate and political parties in the work of the IEBC,” the Carter Centre says.

The report finds specific fault with the IEBC’s response to the KPMG firm’s audit of the voter registration process.

“While the IEBC has taken efforts to correct inaccuracies in the voter register identified during the audit, it was not able to act on all recommendations in the time remaining before the polls,” the Carter Centre says.

Despite taking “commendable steps within the limited timeframe,” the commission exhibited a lack of transparency during the audit process and was initially reluctant to release the full KPMG report,” the Centre says.

These shortcomings “hindered public confidence in KPMG’s work and the subsequent steps taken by the IEBC.”

The report also urges IEBC to follow through on its plan to carry out a nationwide simulation of the Kenya Integrated Elections Management System (Kiems) prior to August 8.

A test of Kiems can help ensure that the technology will function properly on election day, the report says.

The Carter Centre’s pre-election findings are based on the work of a team of experts and long-term observers deployed in Kenya since mid-April.

The election monitors have visited 37 counties and 153 constituencies while observing more than 50 political rallies.

An 80-member delegation drawn from 34 countries will be dispatched by the Carter Centre to assess the actual voting, counting and tallying process.

This group will be led by US former Secretary of State John Kerry and Amiata Toure, a former prime minister of Senegal.