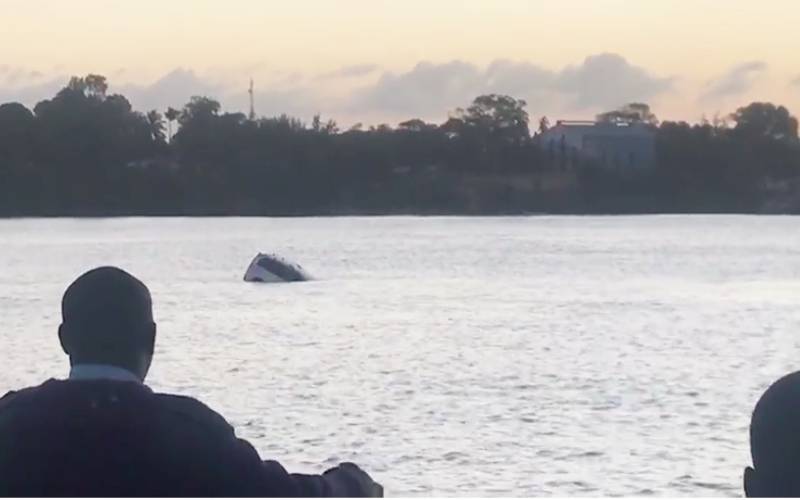 A vehicle with four occupants has reversed from a ferry in Likoni and plunged into the Indian Ocean.Pic: Photo Courtesy

A saloon car on Sunday plunged into the Indian Ocean at the busy Likoni channel in Mombasa.

Police say the white car, which was among the last ones to get into Mv Harambee from the mainland side of the channel, slid back from the vessel mid-stream.

An eye witness Mr Mlei Majaliwa said he saw a woman and a boy in the vehicle.

“I saw the woman and a boy inside the car. She had started screaming and calling for help when the car started to reverse. I threw a life saver at them,” said Mr Majaliwa who was in the same ferry.

“The woman was the driver, the information we have indicates they were four,” said Mr Rotich

Eyewitnesses said there was an altercation between the woman and the Kenya Ferry Service (KFS) officials at the mainland side ramp earlier.

“The officials had stopped the woman after she was seen accessing the ferry from the side which is used by people with KFS special passes,” said an eyewitness.

KFS says the cause of the accident is still under investigations as search and rescue efforts are under way.

“Neither the car nor the occupants have been retrieved. We share our sincere sympathies to the affected as the salvage operations continue,” posted KFS on its official Facebook page.

Car plunges into Indian Ocean at Likoni channel Reviewed by samrack on September 30, 2019 .