A file photo of KDF soldiers during a patrol in Kotile town on the Garissa-Lamu-Somalia border, as part of the Linda Boni operation aimed at flushing out Al-Shabaab terrorists.FILE

Canadian government through its embassy in Nairobi has issued a travel advisory urging its citizens to avoid some areas in the country.

The advisory published on their official website and seen by Kenyans.co.ke, Canada has listed a number of high-risk situations its residents are likely to encounter.

According to the comprehensive report updated on Tuesday, May 10, Canada has warned her people against traveling to Eastleigh, Kibera, and Pangani areas in Nairobi due to increased cases of crime. 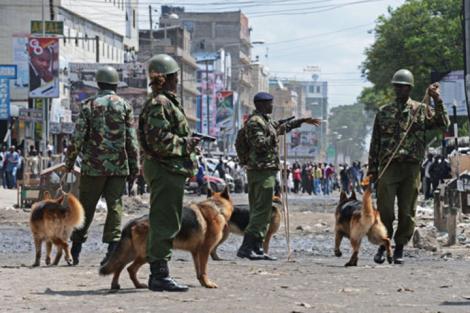 The advisory has also included areas such as Naivasha, and Nanyuki which the Embassy wants visitors to exercise caution.

“There is a terrorist threat. Credible reports indicate that Westerners could be targeted by extremists in Nairobi, Naivasha, Nanyuki, Meru, Narok, and coastal areas of Kenya,” the report read in part.

It added, “The following places could be targeted: government buildings, including schools; places of worship; airports, as well as other transportation hubs and networks; public places such as tourist attractions, restaurants, bars, cafes, malls, markets, hotels and other places frequented by foreigners.”

Canada further cautioned its citizens from traveling to Mandera, Wajir, Garissa, and Lamu counties bordering Somalia, due to the risk of kidnapping and bombings.

Marsabit which was recently placed under dusk to dawn curfew by Interior Cabinet Secretary Fred Matiang’i was also highlighted in the advisory issued by Canada.

“Be extra vigilant during religious holidays or if you attend sporting events or public celebrations. Terrorists have already taken advantage of such opportunities to commit attacks,” the advisory added. Kenyan police inside a building in Nairobi, Kenya FILE

avoid being targeted while traveling in different parts of the country, Canada further advised her people to avoid flaunting wealth or carrying large sums of money, and avoid keeping their credit and debit cards, cash, and other valuables in one place among other precautions.

Canadians in Kenya were also advised to observe all health protocols while moving across the country.

“Never leave your food or drinks unattended, and do not entrust them to strangers. Beware of snacks, drinks, chewing gum, or cigarettes offered by new acquaintances.”