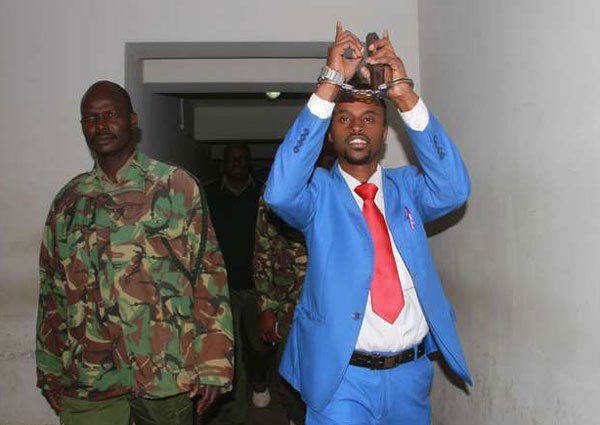 Muktar Edow walks out of a Nairobi court on September 30, 2016 after being sentenced to 80 years in prison. PHOTO | PAUL WAWERU | NATION MEDIA GROUP

A businessman accused of helping terrorists has been jailed for a total of 80 years.

Abdi Rizzak Muktar Edow, who was convicted on seven counts will only serve the first sentence of 20 years for offering logistical and material support to terrorists.

For the rest of the six offences he will serve 10 years for each count. The sentences shall be served concurrently.

Ms Gandani said all the 19 witnesses called by the prosecution linked Edow with terrorism activities including the organisation of an outlawed meeting at the Masjid Musa Mosque in Mombasa in February 2014.

Edow is a 25-year-old businessman based in Narok. He faced various counts among them being a member of Al-Shabaab for which a 10-year jail term was imposed.

In the other four counts, he was charged with being in possession of material for enhancing terrorism and was sentenced to serve 10 years for each count.

Immediately after imposing the sentence, defence lawyer Mbugua Mureithi said he will appeal against the judgement saying it was “too harsh and punitive”.

Earlier, while mitigating, Mr Mureithi had asked the court to “consider imposing a rehabilitative sentence to give the convict time to change saying he was a young father and the sole bread winner”.

HIRED CAR
The prosecution had asked the court to impose the maximum sentence of 30 years.

Ms Gandani gave Edow 14 days to appeal against the sentence. He has been in custody for the last two years.

His request to be released on bond pending appeal was overruled by the court.

Soon after the sentence was read, he was hurriedly evacuated from the court and whisked away by heavily armed security personnel.

Edow was charged with providing his car for hire to an Al-Shabaab linked man identified as Sheikh Hassan on May 3, a day before the vehicle was intercepted at a roadblock in Mandera.

The occupants of the car engaged police officers in a gunfight before they were killed.

According to the prosecution, eight hand grenades were retrieved from the vehicle among other items.

Edow, who operates a car hire service, was arrested on June 2 at the Maasai Mara Game Reserve in Narok.

Businessman jailed for 80 years for aiding terrorists Reviewed by samrack on September 30, 2016 .

Share thisFacebookTwitterPinterestEmailWhatsAppMuktar Edow walks out of a Nairobi court on September 30, 2016 after being sentenced to 80 years in prison. PHOTO | PAUL WAWERU | NATION MEDIA GROUP Businessman jailed for 80 years for aiding terrorists A businessman accused of helping terrorists has been jailed for a total of 80 years. Abdi Rizzak Muktar