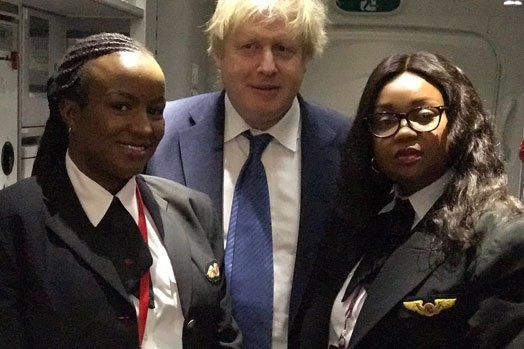 Mr Johnson who is on a tour of various African countries was pictured alongside an excited Captain Irene Koki Mutungi, the first African female pilot to become certified as a Captain of the Boeing 787 “Dreamliner” aircraft.

With my colleague Fiona. We had the pleasure of flying British Secretary of State for Foreign Affairs. @BorisJohnson@KenyaAirways

The foreign secretary’s African visit itinerary is yet to be released but according to the Washington Post, Mr Johnson arrived in Somalia Wednesday for a surprise visit to the country’s newly elected president.

According to a Somali presidential aide who requested anonymity as he is not authorized to speak to the media, Mr Johnson met President Mohamed Abdullahi Mohamed at the airport.

The British government is yet to divulge the details of the visit but the Washington Post cited the drought crisis facing the East African region.

“Britain on Wednesday announced that it would match “pound for pound” the first £5 million ($6.1 million) donated by the public to the Disasters Emergency Committee’s new East Africa Crisis Appeal. The committee is a collection of 13 British aid agencies,” wrote the newspaper.