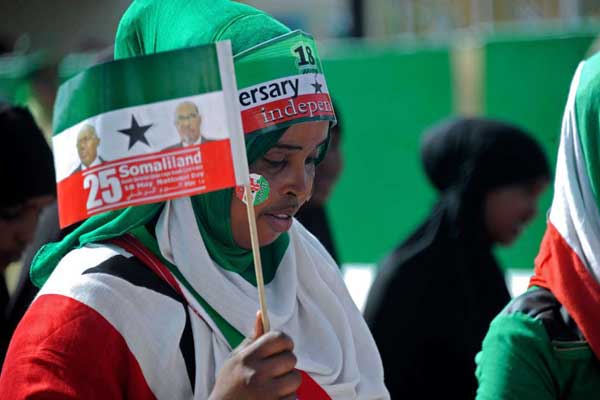 A woman holding a flag as Somaliland soldiers march past during an Independence Day celebration parade in the capital, Hargeisa. Residents of the self-proclaimed state of Somaliland voted Monday in its third presidential poll, hoping to prove its democratic credentials. PHOTO | MOHAMED ABDIWAHAB | AFP

Residents of the self-proclaimed state of Somaliland voted Monday in its third presidential poll, hoping to prove its democratic credentials and strengthen the case for independence from troubled Somalia.

The northern territory, which is more tribally homogenous and stable than the rest of Somalia, broke away in 1991 and has been striving to attain international recognition ever since.

Three candidates are running for the state’s top office, seasoned politicians Muse Bihi of the ruling Kulmiye party and opposition candidates Abdirahman Iro and Faysal Ali Warabe, who was defeated in previous elections in 2010.

“The procedure started peacefully this morning and we are confident that this election is going to be a milestone for the entire region,” said Iro as he voted.

Elections are meant to be held every five years, however the poll was delayed for two years due to drought and other technical issues.

Somaliland’s history of peaceful, credible elections and democratic transition sets it apart from anarchic southern Somalia, and indeed much of east Africa.

Somalia’s election earlier this year saw a president chosen via a limited electoral process that saw handpicked clan elders choosing delegates who were allowed to vote.

Ahead of the Somaliland election, the three main candidates held a televised debate to present their political agendas, focusing on the economy, jobs and international recognition.

“This is a very critical election … for the youth, they need a leader who can develop the economy and bring jobs so that everybody can stay their country to enjoy their lives,” said university student Ismail Mohamed.

The vote is set to be the most sophisticated yet with some 700,000 voters registered using biometric eye scanners which will identify them before they cast their ballots.

A decision by authorities to shut all social media when polling stations close at 6:00 pm (1500 GMT) was criticised by Human Rights Watch last week.

Said Ali Muse, spokesman for the national electoral commission, said the move was necessary to prevent interference from outside the borders of the semi-autonomous state and speculation over results.

In 1991, after years of bitter war with the government in Mogadishu, it declared independence from the rest of the country.