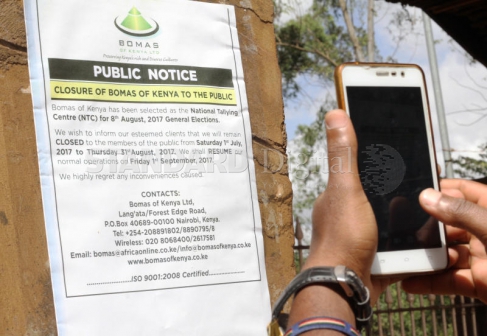 Bomas of Kenya is out of bounds for July and August to give room for renovation ahead of the General Election. [Jonah Onyango, Standard]

The National Tallying Centre for the 2017 General Election at Bomas of Kenya is teeming with activity as the electoral body prepares to deliver the August 8 vote. Enhanced security features, enriched contingency measures and more elaborate planning define the new-look Bomas whose operational features were reduced earlier this year by a court decision. When we visited the tallying centre earlier this week, Bomas staff had cleared the way altogether for the IEBC skeleton staff setting up operational structures at the venue. Majority of Bomas staff have been sent on a two-month leave lapsing end of August. In the period between July 2 and the full take-over of the facility by the IEBC this week, Bomas has been doing maintenance works on various facilities in the compound ahead of the official launch of the centre early next week. A stone security wall around the expansive facility has just been completed. At the main gate, one has to identify themselves and their association with the IEBC before they are allowed in. Vacated The administration block was all vacated when we checked in, including the front office. Only a Kenya Power hireling was idling around after a long-day work fixing an alternate power-line. ALSO READ: NASA loses bid to block manual back-up system He told us they were executing a request to put up an alternate power-line. Previously, the facility has been served by a single power-line connected to the main grid. On the left of the administration block, there’s an empty room marked “Call Centre”. We were informed the centre would be equipped with communication equipment by Telkom Kenya who will be providing the call-centre services. Up the stairs on the right is a marked commission chairman’s office. According to the commission, the chairman is and will be the national returning officer at the National Tallying Centre (NTC). The NTC will function to coordinate national election results management, serve as the national media centre for flow of information, a call centre for the public and be the official source of final election results. “It is at this level that the National Returning Officer, who is the IEBC Chairman, will collate presidential results and declare a winner of the presidential election,” IEBC communications manager Andrew Limo told Saturday Standard. At this small corner office, IEBC Chairman Wafula Chebukati will host official meetings in his capacity as the national returning officer. He will however have to cross over the main Bomas hall to the adjacent operation centre where scans for the results in the counties will be received. Outside the administration block and before the main Bomas hut, a brand new huge CAT power generator was being fixed to compliment the two Kenya Power lines when we visited. Hirelings from a different company were digging the tunnels for the cables that will connect the halls to uninterrupted power. Inside the main Bomas building, the hall looked ghostly, dark and bereft of life. At the raised platform from where speeches are made, a lonesome lectern mockingly stood. From this rostrum, the fifth President of the Republic of Kenya will be declared. The eerie silence in the hall will, in two weeks’ time, be replaced by anxiety, speculation and impatience. Outside the hall, the road that leads to the lobby of the main Boma is being re-carpeted. Speed bumps are also erected on the lane to control motorised speed closer to the lobby. The lane to the left leads to operational nerve centre of the tallying centre. It is here where physical electoral forms were brought in the 2013 General Election, verified and passed on to the commissioners for announcement. From the windows of these operational rooms, CORD agents, among them Johnstone Muthama, Ruth Odinga and Fred Outa, shouted themselves hoarse as commissioners cowed inside, in silence. “Building on lessons from previous elections, both the technology and mechanism of transmitting results to the Bomas have changed dramatically. The technology we have has the capability of scanning the result forms and sending to the NTC, thereby removing the need for physical transportation of forms,” says IEBC CEO Ezra Chiloba. Eatery Also located along this wing of Bomas is the temporary “commissioners boardroom”. We found the administration police officer attached to the IEBC holding forte at the empty room. Next to the boardroom is the famous Utamaduni Restaurant, which serves as the eatery for Bomas visitors and guests. In these two months and with no guests trooping in, it has been taken over by the IEBC to feed its staff and guests. We were informed that the entire facility would be getting a fresh lease of paint before operations pick in earnest. [Nzau Musau]
Source: https://www.standardmedia.co.ke/

Bomas: The all-important nerve centre Reviewed by samrack on August 8, 2017 .