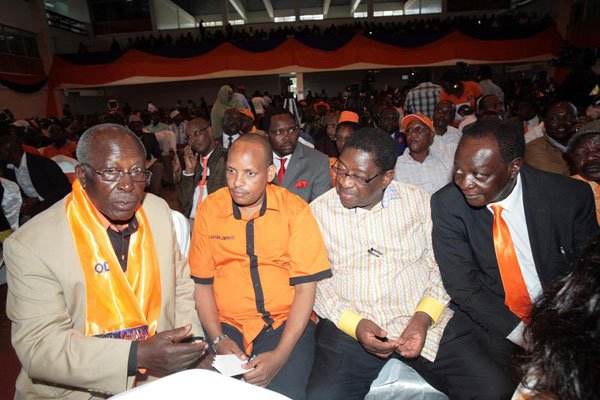 Orange Democratic Movement on Monday gave direct nomination to 427 aspirants — from governors to MCAs — dealing a blow to plans for joint nominations under the National Super Alliance (Nasa) umbrella.

Among the lucky ones to get the party ticket without competition were Nairobi Governor Evans Kidero and his Mombasa counterpart, Ali Hassan Joho.

Those with nomination certificates in their pockets are 16 aspirants for governor, 16 for senator, 11 for woman representative and 307 for member of country assembly (MCA).

They got their certificates from party leader Raila Odinga, who asked them to now focus on their seats and help the Opposition win the presidency.

“Today, we give certificates to some of our hardest working and strongest aspirants and set them free to focus on the big battle of August elections. Some of you have been honoured by your constituents because of the dedication with which you have served the party,” he told the aspirants at the Bomas of Kenya in Nairobi.

By handing Mr Joho direct ODM nominations, it means that he will face Senator Omar Hassan of Wiper, a partner party in Nasa.

The same applies to Kakamega Governor Wycliffe Oparanya who will face Senator Boni Khalwale, who is poised to contest the seat on a Ford-Kenya ticket.

Proposals had been floated by some Nasa leaders to hold joint nominations in order to avoid sibling rivalry at the ballot box, which could gift Jubilee some of their seats.

In the event, Westlands MP Timothy Wanyonyi and Dagoretti South parliamentary aspirant Fredrick Wandera in Nairobi, and Mr Abdulswamad Shariff Nassir of Mvita and his Kisauni counterpart Rashid Bedzimba were among those who received direct tickets.

Nairobi, Mombasa and Nakuru had been named by the Nasa affiliate parties as the possible places for joint nominations.

But with ODM handing out direct nominations, and with Ford-Kenya and the Amani National Congress (ANC) also planning to hold individual primaries, the idea might be as good as dead.

ANC’s Musalia Mudavadi had last week said there was still a glimmer of hope in the joint nominations in the urban areas, which he said would be handled by a joint Nasa elections board.

In the woman representative category, Homa Bay’s Gladys Wanga, Alice Chae of Nyamira, and nominated Senator Janet Ongera (Kisii) were among the 10 that secured the direct tickets.
The politicians will not participate in the ODM primaries that will start this Friday to April 21 to be done in staggered dates in 26 counties.

Said Mr Odinga: “The nomination victory must never go to the most violent man or woman. It must never be turned into an auction where the highest bidder is declared the winner … The National Elections Board must crack the whip on election violence, fraud and bribery in these nominations.

“It is just but a necessary step in the journey of many steps aimed at making Kenya work for everybody’s gain. The other step in that journey is the General Election in August,” said Mr Odinga .

He rallied his supporters to back the Nasa team that he said would hand President Uhuru Kenyatta defeat in the August 8 elections.

The ODM leader listed what he said were Jubilee’s failures as being the 2.7 million Kenyans facing starvation (up from 1.7 million last year), corruption, and the Sh4 trillion debt (up from Sh1 trillion in 2013).

“The chickens are coming home to roost for Jubilee. Kenyans are looking up to us to save them from this incompetence and corruption. We cannot let them down,” said Mr Odinga.

On Monday, the politicians who were given direct nominations termed it a sign of a job well done.

“That we are getting these certificates today is a good thing. We are all doing well,” said Governor Nkedianye of Kajiado.