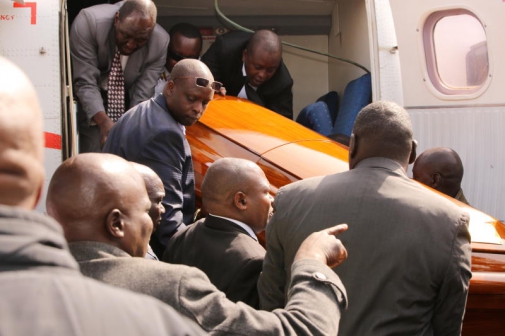 Hannie said Biwott himself swore he had nothing to do with the former Foreign Affairs minister’s death. Photo: Peter Ochieng, Standard

Former Cabinet minister Nicholas Biwott had no hand in the death of Robert Ouko, his widow Hannie Kiprono has said. Speaking at a requiem mass attended by thousands at Mr Biwott’s Toot home in Elgeyo Marakwet County Wednesday, Hannie recalled events of the early 1990s when, she said, reports implicated her husband in murder and corruption. The widow said Biwott himself swore he had nothing to do with the former Foreign Affairs minister’s death. “We were surprised but when we asked him about the reports, he said he knew his heart was clean and even God knew the truth. We asked him to place a newspaper advert to put the record straight but he ignored us, saying he was innocent,” she said. Dr Ouko’s charred remains were found at the foot of Got Alila in Kisumu County in 1990. Hannie said since their college days in Australia, she had known Biwott as a principled and honest person. ALSO READ: Family and friends’ tributes reveal soft side of mysterious Nicholas Biwott “During his days in college, he stood by principles and even told me to never, never, never be dishonest,” she said. She also said the most trying and difficult times for the family were when Biwott was arrested, adding that she was thankful to the residents of Keiyo for standing by him and the family. Keiyo residents “One day while I was at our shop in Yaya Centre, about 200 residents from Keiyo came to speak to me. A guard even attempted to eject them, saying they would bother me, but I told him to let them in because they were from home, Keiyo,” she said. “The delegation encouraged me, saying my husband was safe and nobody would hurt him.” This, she said, was before another delegation of professionals, also from Keiyo, came to encourage her. She told the mourners that the final solace came when former State House Comptroller Abraham Kiptanui and his wife Mary visited and assured her that Biwott had been released and would be rejoining the family. ALSO READ: Nicholas Biwott’s Sh600m debt puzzle and Goldenberg scandal link She said her husband had humbly dedicated his time to service to humanity, adding that following his death, she had received testimonies from people from all regions, including the Kikuyu, Luhya and Luo, who said they had been helped by Biwott. The former minister will be laid to rest today. President Uhuru Kenyatta and his Deputy William Ruto are expected to lead national and local leaders at the funeral of “Total man”, or in his native language, “Karnet” (meaning steel). The coffin bearing Biwott’s remains arrived in Eldoret by air as family members travelled in another plane. A convoy later snaked its way from the airstrip through Eldoret town to Toot as thousands of mourners lined up along the Eldoret-Kipchawat road to watch as the body of the region’s political kingpin was ferried home. During the mass, Hannie was sandwiched between her co-wives Margaret Kamar and Kavista Lessie. They were accompanied by their children and grandchildren as they viewed the body. Introducing themselves, Prof Kamar described Hannie as the “family matriarch” and praised her for taking care of the Biwott family. ALSO READ: Nicholas Biwott’s Sh600m debt puzzle and Goldenberg scandal link “It is now clear, Hannie is the matriarch of the Cheserem (Biwott’s father) family,” said Kamar, who also introduced herself as the mother of Biwott’s youngest child, Maria Soti, also named after her grandmother. When Hannie rose to speak, she told of how media reports attributed to her husband were misleading and disturbing to the family. Record straight “I thank all present at this mass for turning up in honour of my husband. I will speak in English but I want someone to translate so that I can set the record straight,” Hannie said as Kamar stood up to oblige. “My husband had extreme humility. He never criticised, not even his enemies. During the mass in Nairobi, I learnt through accounts how much he had done for this country. It was incredible. He was so humble. I knew him as extremely wise, kind, understanding and knowing politics all over the world. He had knowledge that is not found in books.” newsdesk@standardmedia.co.ke
Read more at: https://www.standardmedia.co.ke/

Hannie said Biwott himself swore he had nothing to do with the former Foreign Affairs minister’s death. Photo: Peter Ochieng, Standard Biwott was never involved in Ouko’s murder, says widow Former Cabinet minister Nicholas Biwott had no hand in the death of Robert Ouko, his widow Hannie Kiprono has said. Speaking at a requiem mass