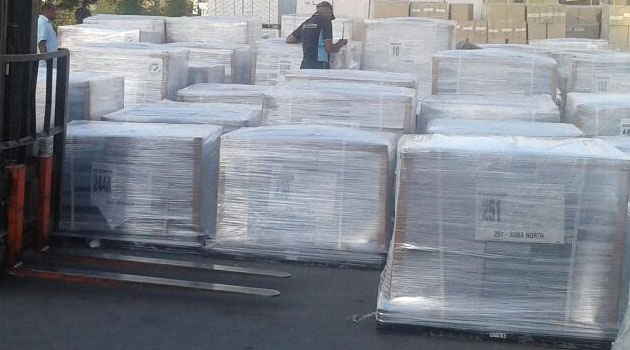 The first batch of ballot papers for Thursday’s fresh Presidential election arrived in the country from Dubai on Saturday night.

A statement from the Independent Electoral and Boundaries Commission said the batch comprised of packages for counties that are far from Nairobi.

“The consignments containing the ballot papers are packaged in constituency pallets and also contain voter registers, checklist forms, KIEMs validation forms and other documents required at each polling station,” reads part of the statement sent to newsrooms from the electoral commission.

Two other consignments were expected to arrive on Monday and Tuesday ahead of the Thursday presidential election seen as a make or break for East Africa’s economic powerhouse.

The ballot papers has names for all the eight presidential candidates who participated in the August 8 election whose results were nullified, after one of them Opposition leader Raila Odinga successfully petitioned the Supreme Court to challenge incumbent President Uhuru Kenyatta’s victory.

The Supreme Court subsequently ordered a fresh election to be conducted within 60 days from September 1 when the verdict was issued, but Odinga has vowed to boycott the poll, having written a letter to the electoral commission which has said it will ignore the notification until he signs the requisite Form 24A, which Odinga has declined to fill arguing that he can only do so if a fresh nomination was done to pick new candidates.

The president, whose August victory was overturned by the Supreme Court, accused the opposition of abusing hard-fought democratic freedoms “to create anarchy”.

Kenyatta while officiating Mashujaa celebrations on Friday was obliged to shake hands with Chief Justice David Maraga, whom he had slammed as a “crook” after his decision to overturn the election result.

Maraga was hailed by many as a hero after the shock decision to cancel the election, which has plunged the country into its worst political crisis since post-election violence in 2007 and 2008 left 1,100 people dead.

Kenyatta said he would “not allow a repeat of the painful past where lives and properties were lost.
We must therefore stand up and say no to any misleading leader out to plunge Kenya into chaos.”

He urged citizens to respect the right to vote or to abstain, and said “security organs have been enhanced and appropriately deployed to maintain law and order”.

Odinga pulled out of the election last week, denouncing the election commission for failing to make sufficient reforms to avoid the “irregularities” that led the first vote to be cancelled.

He has said he is convinced that the August 8 vote was rigged, and that plans are afoot to steal the new election as well.

At a rally attended by thousands in his western rural home of Bondo, Odinga vowed once again Friday that there would be “no election”, though he urged his supporters not to turn to violence.

“I want to plead with you, the differences we have with Kenyatta should not be made personal. Those are our differences. You should not attack each other because of that,” Odinga said.

Odinga accuses the electoral commission of failing to carry out reforms—including the ouster of some of officials accused of bungling the August election.

The electoral commission however, said it has undertaken several reforms and changes on the ballot papers for the fresh presidential poll which either have new or improved features as compared to the August 8 elections.

“The original result Form is of higher quality (grams) for better scans and clearer entries. It is not perforated and therefore not easy to remove and must remain on the booklet. Subsequent copies are perforated to make it easy to share with the candidates and agents,” the commission said.
Equally, IEBC has reduced the booklet size from 50 to 30 ballot papers in a bid to reduce extra ballots.

“There is a stringent mechanism for the accounting of all ballot papers, used or unused,” the commission said.

As part of full disclosure, the electoral body pointed out that the Dubai based ballot printer, Al Ghurair shreds all spoilt election papers on site to eliminate chances of any mischief.
The result forms, it said, are carbonless papers, which mean multiple copies can be created through transferring the impression from the first page. The poll officials have been trained to exert sufficient pressure so that they make at least 5 readable copies using ballpoint pens when they only write on the first page.

The colour of the ballot papers has also been changed even as the electoral body introduces other improved features including UV sensitive security features, watermarks, embossing and anti-copy features.

“Whereas the August 8 presidential poll forms were white, the October 26th forms are grey. The serialization is tapered, which means numbers are made thinner towards the end to discourage forgery,” confirmed IEBC.

The new ballot papers have also been customized, including the name of the polling station printed on the ballot.

“It means with this variable printing, the officials would not have to write the name of the polling station, constituency or county because it is already provided for.”

Share thisFacebookTwitterPinterestEmailWhatsAppThe first batch arrived Saturday with more expected on Monday and Tuesday. Photo/COURTESY IEBC. Ballot papers for repeat presidential poll arrive in Kenya The first batch of ballot papers for Thursday’s fresh Presidential election arrived in the country from Dubai on Saturday night. A statement from the Independent Electoral and Boundaries Commission said the