Avoid influence that contradicts your beliefs, Cardinal Njue advises Kenyans living in US 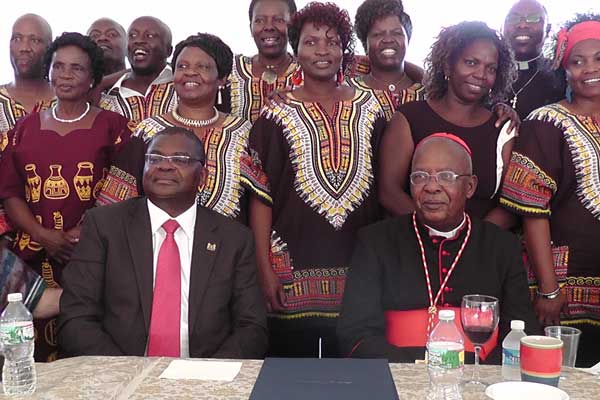 Cardinal Njue and ambassador Robinson Njeru Githae at the reception held in the honour of the Cardinal by Kenyans in the US. Njue called on Kenyans living abroad to shun bad foreign influences. PHOTO | CHRIS WAMALWA | NATION MEDIA GROUP

Avoid influence that contradicts your beliefs, Cardinal Njue advises Kenyans living in US

Speaking to Kenyans living in the US in the state of Delaware over the weekend during a special Swahili mass, Cardinal Njue said Kenyans in the US are living in particularly challenging times because they live in a society that allows and abets behaviours that contradicts their religious beliefs and traditional African values.

“Many of you were born and raised under strict religious beliefs and African traditions.

“But certainly you find yourselves living in a society that allows behaviours that run contrary to these beliefs.

“It is very important that you remain steadfast in your Christian faith,” Cardinal Njue told the crowd of Kenyans assembled at St Elizabeth Ann Seton in Bear, Delaware.

Saying that the youth and children were particularly susceptible to foreign influences, the Cardinal Njue called on Kenyan parents to take charge and explain to the young ones the dangers associated with imbibing Western values that do not enhance the traditional family set up.

“Drawing your strength from the knowledge and wisdom of the biblical teachings, bring up your children in the ways of the Lord by saying no to destructive influences perpetuated here in the name of personal freedoms and choices,” he said.

Delivering a sermon based on the origin of sin as told in the book of genesis, Cardinal John Njue said it was due to the wrong choices that Adam and Eve took in the Garden of Eden that God’s wrath befell man.

“They were clearly told that if you don’t follow God’s warnings, sin will come upon you but because Eve believed in personal choices, she influenced Adam to commit sin,” he said.

Speaking to Nation.co.ke soon after the sermon, Cardinal Njue said he understood the pressure under which the Kenyan families living abroad find themselves in.

“When you are being raised in Africa, the roles and responsibilities of the father, mother and children are clearly defined. It is not the same case here,” he said.

Speaking at the same function, the Kenyan ambassador to the US, Robison Njeru Githae called upon Kenyans living in the US to associate themselves with religious or civic groupings.

Mr Githae said that way it was easy to know the wellbeing and welfare of every Kenyan.

“Please, join a church or any group of your choice even if it is a drinking club.

“We have cases in the recent past where Kenyans die in their homes and are only discovered when the smell from their remains disturb the neighbours,” he said.

The function held on Saturday and attended by more than 1,000 Kenyan from different states was organised by the Kenya Catholic Community in America (KCCA).

KCCA chairman Mr George Marucha said it was meant to bring Kenyans living in the US together to share not only their faith but also life experiences.

Avoid influence that contradicts your beliefs, Cardinal Njue advises Kenyans living in US Reviewed by samrack on August 27, 2015 .

Share thisFacebookTwitterPinterestEmailWhatsAppCardinal Njue and ambassador Robinson Njeru Githae at the reception held in the honour of the Cardinal by Kenyans in the US. Njue called on Kenyans living abroad to shun bad foreign influences. PHOTO | CHRIS WAMALWA | NATION MEDIA GROUP Avoid influence that contradicts your beliefs, Cardinal Njue advises Kenyans living in US