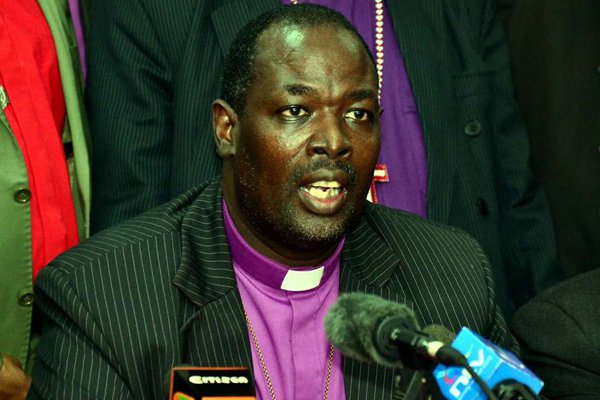 Anglican Church of Kenya Archbishop Jackson Ole Sapit has urged the Government to restore television broadcast for three stations as Kenyans have the constitutional right to access information.

The Archbishop said it is wrong for the Government to deny its citizens their right to information by shutting down the stations.

The Government shut down NTV, KTN News and Citizen TV that defied its warnings and broadcast live the contentious ‘swearing-in’ of Opposition leader Raila Odinga as the people’s president on January 30.

The Government has not restored broadcast even after High Court Judge Chacha Mwita last Thursday suspended the ban for 14 days.

Human rights crusader Okiya Omtatah unsuccessfully tried to serve the Communications Authority of Kenya (CA) with the court order directing the firm to restore broadcast but he was prevented from accessing its offices.

Archbishop Sapit said the Government should allow Kenyans to be informed on the status of the country.

“Kenyans are wise enough to know what is good and bad, they are able to differentiate what to believe,” the Anglican leader said.

Speaking during the consecration of ACK Christ the King Kahuro Church in Kiharu, Murang’a County, Mr Sapit said the Government should not compete with the Opposition as the move would continue polarising the country.

He also urged the state to stop arresting opposition leaders as this would continue dividing the country. The bishop said leaders should instead find solutions to the causes of conflicts during elections.

“The Government should avoid arrests and come up with ways of conciliating the country which is divided along the tribal lines,” the Archbishop said.

His sentiments were echoed by Private Security Regulatory Authority Board vice chairperson Eric Okeyo, who said arresting opposition leaders is hardening them and making them more popular.

Mr Okeyo said the state should ignore the sideshows from opposition leaders and the country would become calm and return to normalcy.

“The tactic by the government to withdraw the police on January 30 worked so well, they should just ignore these people and embark on preaching peace across the country,” said the former Nyakach parliamentary candidate who also attended the consecration ceremony.