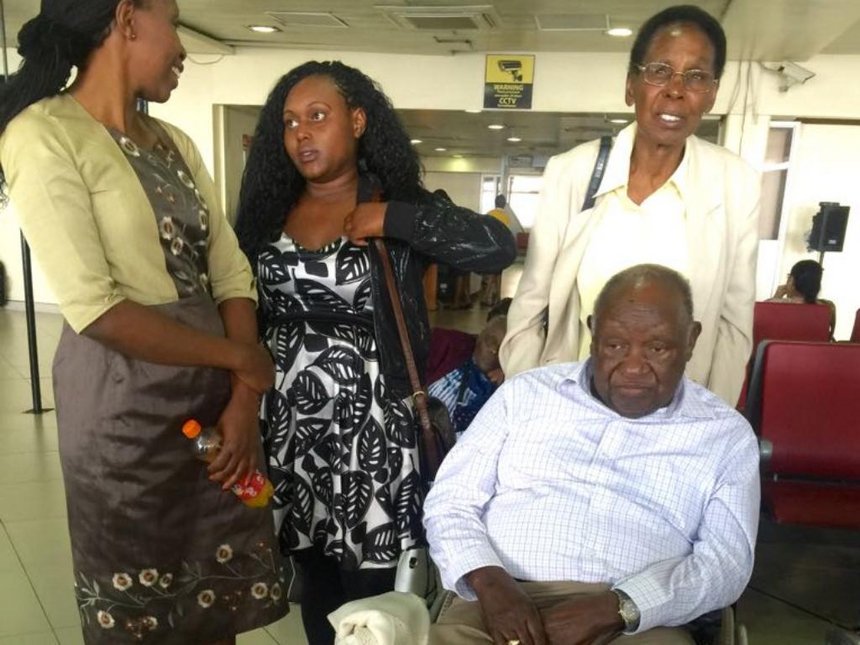 Former politician Kenneth Matiba and his family members wait at JKIA following the cancellation of more than 20 flights by the national carrier, October 2, 2016. /COURTESY

However, Kenya Airways said in its twitter account that all flights are operational but one, a Jambojet flight number KQ436/7, which has had a mechanical hitch since yesterday.

“We are working together to ensure that all guests are assisted accordingly and regret any inconvenience caused,” KQ wrote, explaining that “our sister airline, Jambojet, experienced disruption on a number of their flights today.”

Nevertheless, according to reports by the Nation reporter on the ground, Jambojet sales and ticketing attendants are selling tickets with the earliest flight for Mombasa scheduled to leave at 9:40.

The attendants say there is no delay.

Mr Duale, who had earlier addressed a forum for Youth from the Somali community in the county complained that he had waited for his flight for more than five hours at the airport.‎

“I have paid Sh53,000 and yet I have been here for hours. Many leaders are here including Kalonzo. We finished our meetings early only to come and get stranded here,” he told journalists.

Mr Duale said the KQ management should apologise and explain to Kenyans why they have been forced to spend hours at the airports before they get to their destinations.

“Thousands of Kenyans have been stranded today since 11am, this is unacceptable and I think Parliament, which has the oversight role in making sure that Kenyans get services that they pay for. I was here since 2.30pm, I finished my function early.”

He asked the Parliamentary Committee on Transport and Infrastructure to summon the airline’s management to respond to the matter.

“I cannot believe this. I am told my next flight is 10pm and I had earlier been scheduled to fly at 5pm,” he added.

Mr Duale said there was need for other airlines to also fly KQ routes because it is overwhelmed.

“If they cannot service this route then other airlines must be allowed and do this. This is unacceptable.”

Additionally, he raised concerns over the high prices charged on customers.

He said: “I have paid this business class ticket from Nairobi for Sh53, 000 for a 45-minute flight whereas I can fly to Dubai and Johannesburg with the same amount. Kenya Airways is funded by taxpayers, we will ask why Kenyans are charged these high prices.”

He said he will also raise the matter in the National Assembly on Tuesday.

Mr Musyoka has been in Mombasa since Saturday and addressed a rally at Tononoka grounds earlier in the afternoon.

Anger, disappointment among passengers over KQ flight delays Reviewed by samrack on October 2, 2016 .