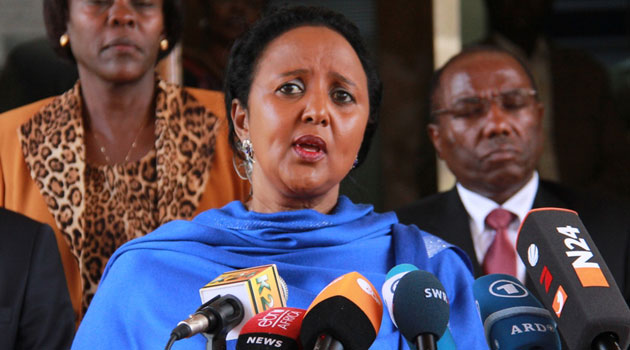 CS Amina was echoing Germany’s Foreign Affairs Minister Frank-Walter Steinmeier who was in the country to bolster economic ties between the two nations.

Mohammed said that as long as due diligence was carried out to ensure the money does not end up in the hands of terrorists, the government was aware that these remittances often provide a life-line to those displaced by the war in Somalia.

“Almost all the refugees that are in our country are heavily dependent on remittances from outside Africa for their survival, for their day to day living. So we must carry out due diligence and make sure that the resources are actually being transmitted to the right people,” she said.

She was echoing Germany’s Foreign Affairs Minister Frank-Walter Steinmeier who was in the country to bolster economic ties between the two nations.

He said that as long as due diligence was conducted, his government would not seek to block remittances to Somalia.

The tight restrictions recently adopted on remittances from the US to Somalia has caused some concern among humanitarians who say it has negatively impacted those Somalis not involved in terror activities and who rely on them for their everyday survival.

Restrictions, they say, that could worsen the effects of food insecurity in the war ravaged nation.

In January the United Nations warned that more than 38,000 Somali children are at “high risk” of dying of starvation. READ: Ordinary Somalis hit by anti-terror banking rules.

There is also concern that these restrictions could further fuel the black market and create even greater avenues for crime.

In July last year, three Somali women were arrested for funding Al Shabaab by sending remittances from the US and Netherlands.

Claiming to be sending money to their brothers or orphans, the women sent money transfers to both Kenya and Somalia and often in small amounts of USD50 or 100 in a bid to avoid raising any red flags.

Muna Osman Jama was arrested in her home in Reston, Virginia; Hinda Osman Dhirane in Kent, Washington; and Farhia Hassan in the Netherlands.

Two other women, according to court records, are believed to be hiding in Kenya and Somalia.

CS Amina was echoing Germany’s Foreign Affairs Minister Frank-Walter Steinmeier who was in the country to bolster economic ties between the two nations. By OLIVE BURROWS | February 22, 2015 NAIROBI, Kenya, Feb 22 – Foreign Affairs Cabinet Secretary Amina Mohammed on Sunday said Kenya has no problem with Somali refugees receiving remittances from their