AMBASSADOR ROBINSON GITHAE IN BOSTON REASSURES KENYANS IN THE DIASPORA REGARDING VOTING, INVESTING, DOUBLE TAXATION AND APPOINTMENT OF AN HONORARY CONSUL 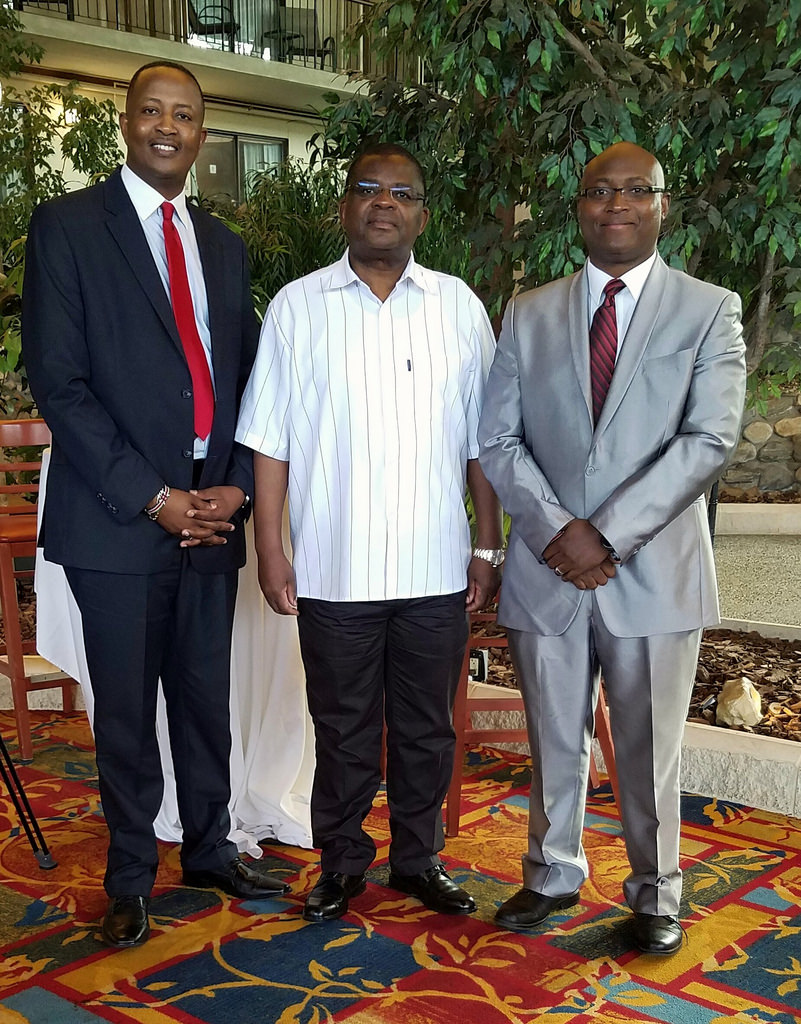 AMBASSADOR ROBINSON GITHAE IN BOSTON REASSURES KENYANS IN THE DIASPORA REGARDING VOTING, INVESTING, DOUBLE TAXATION AND APPOINTMENT OF AN HONORARY CONSUL

During his recent visit to Boston, Massachusetts in an exclusive interview with Samrack Media, His Excellency Honorable Ambassador Robinson Njeru Githae addressed the Kenyans in the Diaspora reassuring them on major issues of concern to them; including voting in the next Kenyan general election, investing in Kenya, taxation, and opening of Honorary Consulates in the United States.

Addressing the issue of Diaspora voting, the Ambassador stated that the Independent Electoral and Boundaries Commission (IEBC) was finalizing the logistics and putting infrastructure in place in a bid to make sure that Kenyans in the Diaspora are enabled to participate in the next general elections. The plan right now is to have Diaspora Kenyans vote only in the Presidential Elections and, hopefully, participate in electing other officers including governors, women’s representative’s, MP’s, senators and MCA’s in the future to. He reminded the Diaspora about the importance of participating in the ongoing process of Diaspora mapping of countries and states that is being conducted by the IEBC to see which ones meet the threshold. The Ambassador reported that IEBC requires that there must be at least 3,000 Kenyan citizens in a particular country or state for it to set up a polling station.

On the issue of investment, the Ambassador stated that Kenya remains keen to increase Diaspora involvement in the business sector and welcomed the news that the remittances continues to play a big role in the Kenyan economy. He reminded Kenyans to be careful when investing back home and to use reputable companies and professional instead of using “relatives and old friends” who ends up taking advantage of them and eventually exposing their hard earned Dollars to the possibility of misuse and loss. He reported that the business climate in Kenya has continued to steadily improve and investors are reaping great benefits and return on investment in different areas of the economy; including real estate, agriculture and tourism. Ambassador Githae said that he is happy when Kenyans do well and prosper in the USA and his goal is to find the best way to ensure that Diaspora Kenyans are incorporated and involved in Kenya’s rapid economic growth and development.

Thirdly the Ambassador addressed the issue of Foreign Account Tax Compliance Act (FATCA) that requires Kenyan Nationals living in the USA to disclose and possibly pay taxes to the U.S. Internal Revenue Service (IRS) on any investment or business ventures they have in Kenya. The Ambassador informed that the Kenyan Treasury was spearheading discussions with the U.S. Government on an agreement that will ensure that Diaspora Kenyans are not taxed twice and any income taxed in one jurisdiction is not taxed in the other jurisdiction.

In an effort to bring Government services close to the people, His Excellency Ambassador Githae said that plans to open Honorary Consulates in the United States are still underway and as soon as all the plans are finalized the Embassy will make an official announcement on the details of the selected Honorary Consuls. The objective of involving Honorary Consuls is to bring Consular services closer to the people and also reach out to potential business people who want to invest in Kenya. States being considered include Massachusetts, Illinois, Texas, Georgia, Minnesota and the State of Washington.

AMBASSADOR ROBINSON GITHAE IN BOSTON REASSURES KENYANS IN THE DIASPORA REGARDING VOTING, INVESTING, DOUBLE TAXATION AND APPOINTMENT OF AN HONORARY CONSUL Reviewed by samrack on September 7, 2016 .