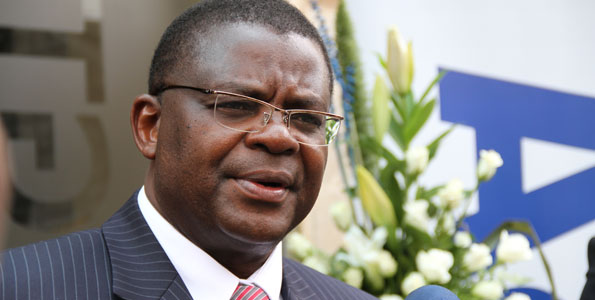 BOSTON–Newly appointed Kenyan envoy to the US, His Excellency Robinson Njeru Githae will visit Kenyans in Boston on Sunday April 19 where he will lead in issuing of new the new generation Kenyan ID cards, renewal for expired passports as well as attend prayers for Kenyan marathon runners.

According to an official communication from the Embassy in Washington D.C, the envoy will be in Boston to attend the Boston Kenyan Festival on Sunday April 19th, at the Lodge of Elks in Lowell, and then lead Kenyans as they cheer their marathon runners at the Boston Marathon finish line on Boylston Street the following day, Monday April 20.

“As Kenyans, we should be working towards one goal which is to promote the Kenyan culture and pride. As the embassy, we also propose that we carry out the ID registration at the venue,” said the Ambassador while confirming his attendance.

As a result, Kenyans in the entire New England region have been urged to set aside the day in order to take advantage of the presence of the Ambassador and his entourage from D.C to get their national ID registration right within their background instead of waiting to take a long and expensive trip to Washington for the same.However, according to embassy officials, Kenyans with expired passports will need to complete and print out the passport renewal application online at the Kenya embassy website,purchase the required renewal fee money order,a self addressed envelope with a return postage stamp, two passport size pictures.These documents will then be collected by the Embassy staff during the event at the Elks Lodge for onward processing.

“We are looking forward to a big turnout Â so we can serve as many Kenyans as possible since we were not able to issue a lot of IDs when we visited Boston last year,” said an embassy official while speaking to Ajabu Africa.

Following the confirmation of attendance, many leaders of different Kenyan groups in Boston have vowed to turn the page and mobilize their followers so that they can benefit from the rare exercise that transcends any pre-existing differences.

Since January this year, leaders of different Kenyan groups have held 3 productive meetings at the St. Pauls Community church in Lawrence to discuss and find ways of mending divisions among nationals in the region that came to an unfortunate crescendo during  the recent visit by president Uhuru Kenyatta.

More meetings have been slated to take place after the visit by the Ambassador since, according to convenors the process is long and requires a lot of patience.

But in the meantime, all leaders in the region that have the interests of their followers in New England at heart have expressed desire to work as one community Â and attend the event when the new ambassador comes into town.

“We all would like to make sure that every Kenyan who needs a new ID card or passport to get this important information and make advance preparations to be there. It is also very important that we all unite and welcome our Ambassador with the honor he deserves during this first visit to Boston, said Venerable Peter Gachathi, chairman of the Kenyan American Pastors Fellowship (KAPF).

“This is a very important exercise. We will support it and make sure that our members and everyone in our community benefit,” said father Samuel Mathenge, the newly appointed priest of the Kenyan Catholic Community & Friends in Boston.According to organizers, in addition to the very crucial consular services to be offered at the event, Kenyans will also enjoy entertainment and speeches from very important local leaders who have expressed the desire to work with the Kenyan community to improve common issues that they care about, especially at improving opportunities for their current and future generations.

“People need to have these documents updated in order to carry out various government processes. We will also have a chance to celebrate our Kenyan culture through a big lunch of traditional Nyama Choma & Ugali, performances by several cultural groups representing various Kenyan tribes, arts and crafts as well as a display of successful businesses by local Kenyan entrepreneurs,” said a statement from the New England Kenyan Association officials, who are working hand in hand with many other Kenyan groups to make the event a success.

Organizers urged Kenyans and local US business entrepreneurs who would like to show case their products and services at the event to contact organizers for sponsorship information.

The visit to Boston will the envoys maiden trip to the region that boats a large population of Kenyan nationals, many of whom have an increased number of Kenyan American children that are now coming of age.

“This is a very good thing that the Embassy is doing. Many of our children who came here without IDs are having a hard time purchasing stuff and accessing government services in Kenya without proof of their Kenyan citizenship.They need these IDs as soon as possible,” said Anthony Mbatia from Nashua, New Hampshire, one of the event organizers.”As a relatively new Kenyan in this area, I am happy that the Ambassador has found it fit to take his time off his busy schedule and attend this event with us. We need to get together proudly as Kenyans from different backgrounds and at least enjoy one day of Kenyan fun,” said Edward Otieno Yongo, another event organizer.

Other Kenyans who spoke to Ajabu Africa said that they are very interested to know firsthand from the ambassador about the process of dual citizenship registration for Kenyan children born in USA since the amalgamation of the new Kenyan constitution that allows for dual citizenship.And to clear some misinformation within the Kenyan community in Boston, the event was not initiated by the Kenyan Embassy, but is wholly organized by members of the Kenyan Community as the second annual celebration following the inaugural event last year at the Sheraton Boston Hotel in downtown Boston.

Ambassador Githae graciously accepted to attend as an invited guest speaker as he was already bound to be in Boston for the Boston Marathon event the next day.

With the Ambassador attendance and his offer to bring staff to conduct new generation ID registrations, organizers moved the event to the Elks Lodge in Lowell to allow as many Kenyans as possible be able to get the consular services in an easy to reach location, far much cheaper and convenient than travelling to Boston or Washington D.C for the same.

As such, the Embassy is not footing any costs associated with hosting the event but organizers are relying on the usual ticket sales and sponsorships from business entrepreneurs employed by various hosts of Kenyan events held in hotels or private halls.

Tickets will be available at most local churches, and at the following store locations:

More outlets will be announced as soon as they become available.

However, Kenyans are encouraged to utilize the online platform more for the purchase before April 15 to enable organizers do better planning as well as avoid a higher fee at the door.

Amb. Robinson Githae to visit Kenyans in Lowell for Marathon Events, SUN April 19-Passports, IDs to be renewed Reviewed by samrack on April 10, 2015 .