All Saints’ Church where only whites worshipped 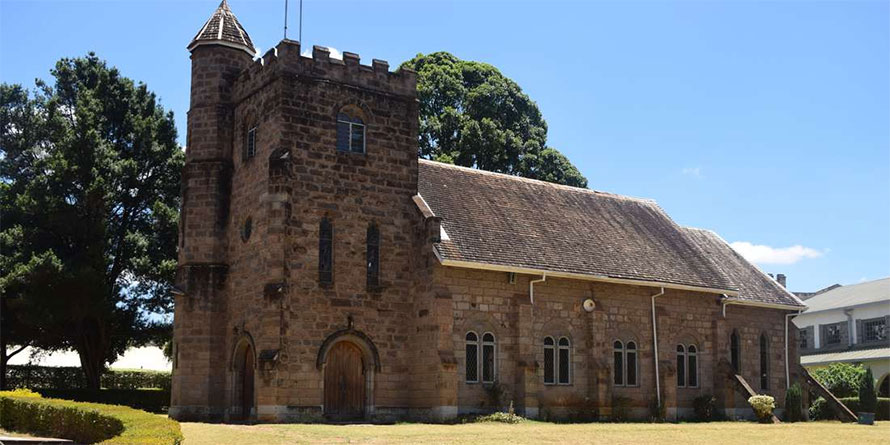 All Saints’ Church where only whites worshipped

Limuru was one of the earliest European settlements with records indicating a Mr. W.H. Caine planting Kenya’s first tea in this area in 1903.

By 1910 there was a sizeable settler community in the area towards Tigoni and the first church service on record was conducted on January 15, 1910 by the Rev. P.A. Bennet, after whom Bennet’s Ridge Road from Kamiti to Kitamaiyu was named. Later, on December 17, 1911, the Rev. W.P. Low conducted a service on Buxton Farm.

Some time in 1912 Colin Campbell, a farmer in the area, donated land on which a simple wood and iron church, named All Saints, was built for Europeans only with donations from the farming community, making it one of the oldest churches in Kenya.

The first baptism was held on March 9, 1913, that of Mary and Edith, the twin daughters of A.B. and Agnes McDonell, another farming family and the founders of Limuru Girls’ School.

According to Diana Shaw, a resident of Limuru since 1935, John Fowler told her that as a young boy in 1913, he remembers seeing the head of a mule appearing through one of the church windows during a service.

All Saints’ Church became part of Kiambu Chaplaincy which covered a large area from Thika and Makuyu to Uplands within the Diocese of Mombasa.

By the early 1930s it became clear that the original church building was too small for the rapidly growing European Community and plans were mooted to raise funds for a new and bigger structure. In 1936 a fete was organised at nearby Brackenhurst Hotel by European parishioners who later rode the streets of Nairobi on ponies, dressed as Cockney Pearly Kings and Queens to raise funds.

Thereafter, A.B. McDonell or “AB” as he was affectionately known, who was also an architect, was asked to submit a design for a new church. In 1938 he produced drawings of a Victorian style country church, popular in England during the 19th century. The working drawings were produced by Messrs. Archer & Cobb, Architects of Nairobi. “AB” was asked to supervise the work while the building works were performed by Premji, an Indian contractor. Construction started in 1939 and the new church was consecrated on April 7, 1940 by the Bishop of Mombasa Reginald Percy Crabb. The cost of construction was £1,200.

Nestled between the Banana-Tigoni road and the access road to Limuru Girls’ School, All Saints’ Church, Limuru sits on about five acres of red soil, well-treed land.

The building features walls built of stone with recessed mortar joints buttressed at regular intervals. The area around the apse is reinforced with flying buttresses. A high-pitched roof covered under treated timber shingles is supported by beautifully crafted cedar trusses while the vaulted ceiling is finished in polished tongued and grooved wood panelling. Doors are made of handcrafted hardwood hung on arched timber frames and wrought iron hinges while windows are glazed in steel casements in arched openings. The original floor was finished in quarry stone but has recently been redone in a hard-wearing PVC finish.

There is a balcony above the entranceway with a wooden floor finish and a castellated parapet wall externally adjoining the bell tower which was added in 1956. Pews are sculptured in highly polished timber while fine reredos, carvings and paintings adorn the altar, pulpit, choirstalls and the panels in front of the galley. I understand most of the carving work was done by “AB” himself.

Much of the furniture, the organ, the electric church bell (a recording), kneelers and other objects came from donations by parishioners and well-wishers to create this quaint little church that can sit about 250 worshippers.

There is well kept graveyard to the south and west of the main church. The first person to be buried there was Colin Campbell on July 30, 1915. Louis Leakey “Wakaruigi” and other members of the Leakey family, who originally came as missionaries but are better known as anthropologists, are also buried there as is Archbishop Beecher and Joseph Koinange, the first African Principal of Kenyatta University College whom we buried there last year at the age of 94. There are many more African people who have been buried here since independence including a gentleman, if I may use the word in its most liberal context, whom it is said had been defrocked following a scandal but was accommodated because he was a resident.

In what must have been a brave move, the first bilingual Kikuyu/English service was taken by Rev. E.K. Cole assisted by M. Kuria and T. Ngumbu in 1955 at the height of the emergency. The first African to be allowed to worship in the church was Joseph Koinange in the same year. Was this an olive branch being extended to the hostile Kikuyu community?

Several outbuildings have been added over time including the now must-have multipurpose hall, a new Vicar’s house and offices.

There are three services on Sundays; Matins, held from 8am every other Sunday for those who love to hear the beauty of the old English language, the Family Service in English and a Kikuyu Service. Diana Shaw and Fiona Vernon, long standing residents are the only regular European parishioners who attend services at the church today.

I had the pleasure of being invited for the main service by Grace Koinange and I could not help noticing that the old English liturgy and Bibles from the 1950s are still in use. Nevertheless, there is a dynamic praise and worship segment giving a wonderful blend of the old and modern styles of worship led by the melodious voices of the choir. The congregation is made up of a good mix of the old and the young which is a good omen for this mainstream church. The current leadership of the church spearheaded by Venerable Francis Thande is vibrant and focused.

It is gratifying to note that having started as a place of worship exclusively for white settlers of Limuru, this sanctuary is now an integrated Christian community where all may enjoy their chosen form of worship.

All Saints’ Church where only whites worshipped Reviewed by samrack on April 4, 2019 .

Share thisFacebookTwitterPinterestEmailWhatsAppAll Saints Church in Limuru. PHOTO | COURTESY All Saints’ Church where only whites worshipped Limuru was one of the earliest European settlements with records indicating a Mr. W.H. Caine planting Kenya’s first tea in this area in 1903. By 1910 there was a sizeable settler community in the area towards Tigoni and the