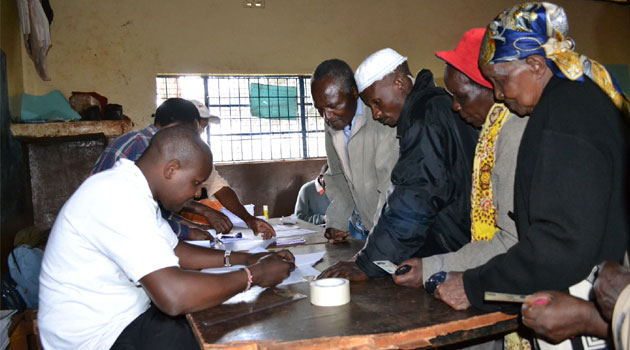 ubilee Party now says all their members will be allowed to participate in the ongoing primaries, provided one has a national identity card.

This follows numerous complaints by hundreds of their supporters who were being barred from participating in the exercise since their names did not appear on the register.

Jubilee Party National Elections Board Chairman Andrew Musangi says no party is yet to get an updated register from the IEBC but insist that no member should be refused from participating in the primaries.

“We have received some reports of hitches being experienced in some areas where some voters have found that their names are missing on our party register in various polling stations. Upon investigating this, we have observed the problem is particularly being encountered where voters registered with the IEBC during the recent voters registration and also in the situation where voters changed their station,” he said.

“We have consistently stated that one of the Jubilee Party’s fundamental aspirations is that no voter should be disenfranchised and we have decided to instruct all our presiding officers that they should verify the identity of voters who do not appear on our register by checking their nation IDs and entering the details of the affected voter into our voters book. Once this is done, no voter should be denied the freedom to exercise their democratic right and vote in our primary.”

He has urged the party supporters to exercise restraint, saying they are up to the task in addressing emerging issues like shortage of voters materials.

Musangi urged their supporters to desist from taking the law in their hands when faced with challenges.

“The people who are behind this will face the full force of the law,” he stated.

He said the party was constantly reviewing their logistics to ensure everything goes as planned.

Kirinyaga County had earlier faced logistic challenges which have since been sorted out.

The Party has also moved the Murang’a primaries to Wednesday.

All ID bearing Jubilee Party members eligible to vote in primaries Reviewed by samrack on April 24, 2017 .

Share thisFacebookTwitterPinterestEmailWhatsAppVoters who participated in Jubilee’s bungled primaries on Friday present their IDs to a clerk in Kiambu/MOSES MUOKI All ID bearing Jubilee Party members eligible to vote in primaries ubilee Party now says all their members will be allowed to participate in the ongoing primaries, provided one has a national identity card. This follows